Image and the Soul Sickness

In my last post, I described a soul sickness. This is not merely an individual sickness, however. Disease of an intellectual nature pervades our society. Everywhere, you will find evidence of it. Look to your television, observe the advertisements, watch the cynical humor of the average sitcom. Engage in debates on Social Media, on a topic which interests you and upon which you are expert in your level of knowledge. How few thus encountered know anything substantial about the topic at hand? Yet they take it upon themselves to debate the matter with a presumption that their own opinions on a subject are valuable, despite the fact they objectively know nothing about it. Ask a man his opinion on anything, and he shall give it to you, rather than admit ignorance. Penn & Teller demonstrate this point rather aptly:

Dystopic is a name I have chosen for myself, but it is as much for my own history as it is for the state of affairs in the West today. You see, there was a time in which I fancied myself a wise man, in contravention to the wisdom of Socrates. My opinions were sacrosanct and all others must have been in error. Yes, I was insufferable and thought myself right in all things. This was despite the fact I knew much of what I said was full of lies.

Life for me, then, was a journey away from this safe space, to borrow a term from the Social Justice crowd. In that safe space, I was right and others were wrong. My greatness was taken as fact and thus if the world did not cater to me, it was an injustice. I was cheated if not given what I desired. Things were not earned nor created. Subterfuge and oppression were the means to advancement, all else was meaningless.

A Soul Sickness, indeed. Fortunately, reality intruded at some point, as it is wont to do. Gradually, over the course of a decade, I came to awareness of my shortcomings. In my youth, I often wondered why Pride was counted as sinful. Now I understand. Saying one is proud of a real accomplishment is no wrong. Michelangelo no doubt had pride in the art adorning the Sistine Chapel. My far lesser achievement of building an multi-cade arcade machine from plywood and spare computer parts is a thing I feel pride in. Consider that a feeling of satisfaction with a job well done.

But Pride, with the capital letter, is a different matter. Thoughts of infallibility are wont to creep into the recesses of your brain. Soon, others look profoundly less human to you. They are inferiors, people who cannot understand your greatness. Pride, the sin, is an elevation of self to Godhood, and to say it is wrong is to say the Rack is a slightly unpleasant device.

This sickness has infected most of the intellectual establishment in the West. Profound temptation toward it abounds. Caustic one-liner quips and memes are the order of the day. An entire debate can be expunged by a single line of sarcastic rhetoric that sounds catchy. Call the white man “wonderbread” and the debate is ended. He cannot dance, nor jump, and is profoundly square. Thusly, his observations on economics and foreign policy in the Middle East can be safely dismissed.

CSI Miami, one of those police procedural shows which has absolutely no basis in reality, illustrates this concept neatly. The protagonist, a police officer, must always put on his RayBans before delivering the one-liner that sums up 45 minutes of television boredom. It is common enough that a video has been assembled with a collection of them.

Image is carefully crafted in the modern world. Photographs of Barack Obama are often backlit in such a way that he looks like the Messiah, bathed in a warm glow, his hand outstretched, ready to touch the unclean masses and lift their burdens. Missteps in a debate are covered to the exclusion of the remainder of the content. A misspoken word, a pop culture reference misunderstood, a poor fashion choice… these can all destroy a man’s career, his image and his life if he is in the spotlight. Of course, a sympathetic media is helpful in avoiding this.

Similar phenomena can be seen in the marketing industry, where branding is everything. Nike shoes have an image, carefully crafted by the expenditure of billions and the diligent efforts of an army of designers, agencies, writers, and artists. What does it matter if the footwear is assembled in a third-world country by people who observably hate Americans and would cheerfully slit their throats if provided the opportunity to do so? Brand and image matter, quality or responsibility do not.

This chart sums up the notion quite nicely: 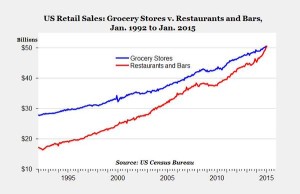 For the first time, Restaurants and Bars are getting a larger slice of the consumable dollar than grocery stores. This is because of two observable phenomena: laziness and image. Gone are the days that friends and family are frequently invited over for a homemade dinner. It is more common to meet at a trendy restaurant or bar and spend altogether too much money. When I explain to individuals that I enjoy cooking, and my wife does also, raised eyebrows are the norm. Nobody likes to cook. Indeed, outside of cooking as a profession and the occasional SuperBowl BBQ (for which a minimum $1000 stainless steel BBQ is required), the practice is frowned upon as quaint and cheap. Only a miser would craft his own food.

Indeed, a person’s image is like a puzzle, assembled from pre-fabricated components provided by Pop Culture and Media. Perhaps you are a Seahawks fan who drinks craft beer from Dogfish Head brewery, who drives BMW automobiles and wears a Rolex. These things, in themselves, are not problematic. A fondness for certain things, even of an expensive nature, is good and well so long as it is genuine. But the average wearer of a Rolex watch cares nothing for its engineering, nor its history. He cares that people will look at it and think him well-off and sophisticated for having afforded it.

One is easily prone to exaggeration or outright lies in order to protect this crafted image. Some who cannot afford the genuine Rolex will attempt to pawn off a fake as being real. An entire industry in New York City surrounds this sort of thing. Another will say of his older BMW “yes, I bought it new and just like it a lot, this is why I have not traded it in for the new one.”

The soul sickness infected me once, and in recent times I felt its influence beginning to return. It had to be expunged. I suspect that for most right-thinking folks in modern America, occasional purges of this nature are necessary and good. Every individual in the West is constantly bombarded with these notions of perfect image to the exclusion of all matters of substance. Taking time away from media, marketing, and propaganda is freeing. So is understanding one’s place in the world. We are not kings, nor special snowflakes, but men, flawed but possessing a certain station in life nonetheless.

Thus the next time you engage in a debate, or buy that new fancy car, ask yourself why you are doing it. Is it for a love of the thing at hand, or is it because of image? The answer may surprise you.

Marcus Aurelius quoted thusly in The Meditations (thanks to Vox for the suggestion to read it):

How much time he saves who does not look to see what his neighbor says or does or thinks.