You know, I’m starting to understand why all these people say of me “Dystopic, you’ve got an old soul.” I’ve never really gone in for such metaphysical claptrap, insofar as my love of fart jokes and sex humor is proof that, whatever I soul I may or may not possess, it is not terribly mature.

But watching the Political Left act like spoiled children, kicking and screaming in the grocery store aisle because, God forbid, their parents chose the cereal without the Hillary campaign sticker attached to it, I have come to realize that I do posses an old soul in a much more relative sense.

Because around half of the folks in this country appear to have souls that have not aged far past the toddler stage. Compared to the morons blocking streets and lobbing baseball bats at cars full of pregnant women trying to give birth, because Hillary Clinton didn’t get elected, I am a paragon of proper behavior. Why, I am quite polite and civilized next to these cretins.

No, my friends. I am not wise, nor do I possess an “old soul”, nor am I God’s gift to punditry. I am merely a relatively normal individual in an age full of adult toddlers pretending their Progressive spew is proper and moral political discourse.

Or demand that the election results be ignored because Joss Whedon said so:

Old soul? Young soul? Either way, it’s the soul of an idiot.

Whatever you say, Joss. You know, I genuinely liked Firefly and Serenity, but let’s consider for a moment that Hillary Clinton probably would have been wearing blue gloves in that series. Some held hope that he was a closeted Conservative, because of the distinctly anti-big government tone of this show. I think we can safely assume that theory to be utter horseshit at this point.

I remember someone suggesting that electing someone who let Podesta, a Dark Acolyte of Satan, run their campaign was probably a bad idea. After all, God knows we don’t have particularly high standards for politicians these days, but certainly we can at least avoid that, right? Except we very nearly didn’t.

Poor Richard Nixon, vilified forever for such a comparatively small scandal. Tricky Dick doesn’t hold a candle to the Clintons. And still, they agitate for her in the streets. One protester decided to go a little to far onto the freeway and wound up getting run over for her trouble.

Lena Dunham tells us that the extinction of white people would be great, then Slate runs an article wondering why white women voted predominately for Trump. Hillary’s campaign staffers are flabbergasted that she lost the election, meanwhile her rural outreach staffer was based out of Brooklyn. Because unemployed factory workers in Michigan are going to be wooed by a Brooklyn hipster. You really can’t make this stuff up anymore.

No, I don’t have an old soul. It only feels that way when you live in a country populated by toddler-esque morons.

It’s bad enough that a wealthy and powerful elite have such a tight grip on this country. But it’s even worse that they are incredibly stupid elites. Hillary appeals to Jay-Z and Miley Cyrus to save her ailing campaign, as if anybody cares about the political opinions of a woman who romps with inflatable penises on stage.

A quote I found floating around Fecalbook this morning sums it all up nicely:

The last time Democrats were this mad at Republicans was when the Republicans abolished slavery and let black people vote.

These days, of course, they are more angry that white people can vote. But there it is, the essence of being a Democrat: telling anybody who disagrees with the narrative to just shut the fuck up and stay out of the voting booth.

Compared to that sort of “wisdom” I may as well be Socrates himself. I’m sure they have plenty of hemlock they wish they could make me drink, after all. 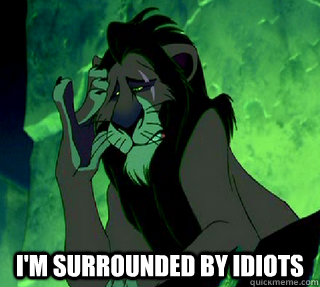