Idiot of the Week: Reality is Racist

Rant warning. This is going to be bad. You’ve been warned.

You know, I see a lot of stupid shit on the Internet. I consider it a service to scour the bottom of the intellectual barrel in search of prime examples of Social Justice idiocy. And so I have a relatively high tolerance for stupidity, borne out of necessity. But there are times even I recoil from the eldritch horrors I find in the festering, wretched hives of Social Justice.

Today’s example comes from one Emily Crockett, writing for Vox.com. It’s instructive that Vox.com, like The Guardian, often supplies material for us brave, intrepid explorers of rampant idiocy. It’s like the the Mordor of Social Justice. Here, just take a look at this screencap: 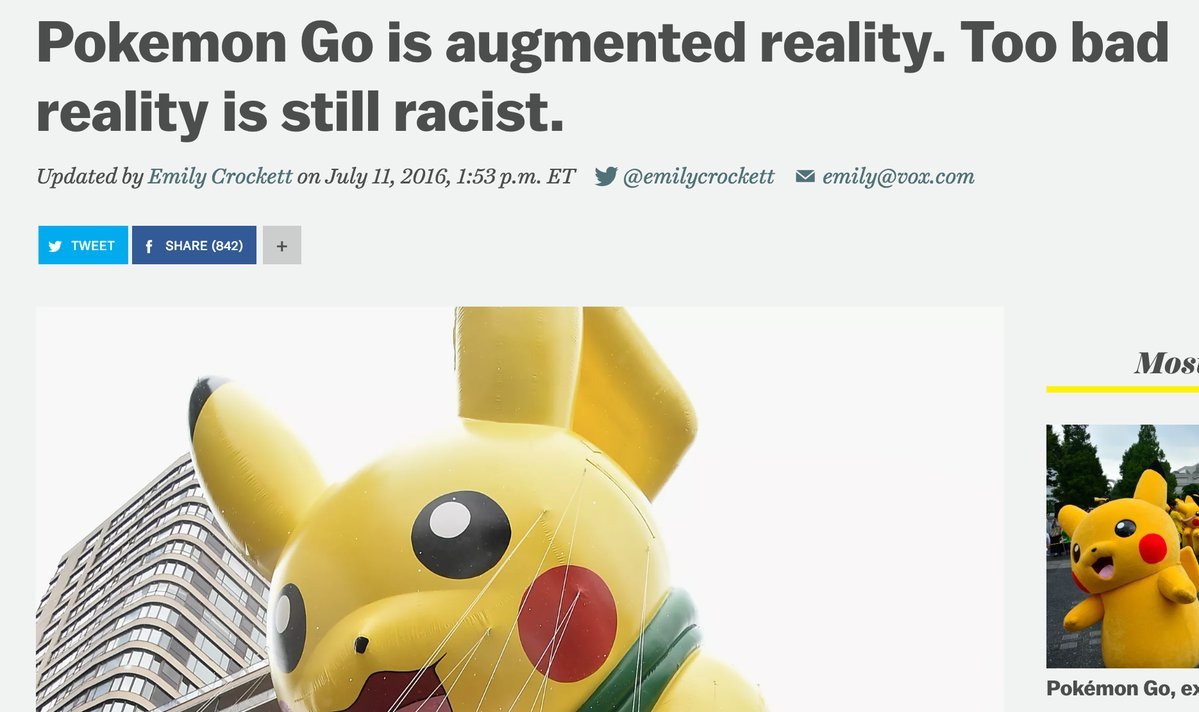 Reality is racist. Seriously. That’s the argument this captain of idiocy is spewing from her mouth-hole. I’ve taken dumps from which more intellectual truths could be divined.

Yes, the horror from the elder days of Marxist assholery has manifested anew in the form of Miss (I’m sure she’s not a Mrs., who the hell would put a ring on a finger attached to a creature this stupid?) Emily Crockett, Social Justice Warrior and minion of the land of Vox.com. Let’s fisk this sewage and learn what we may.

“Warning: Pokémon Go is a death sentence if you’re a black man,” Omari Akil argued in an essay at Medium over the weekend.

You know, I’m not exactly a fan of this Pokemon Go shit. I’ve seen full grown men (at least in body, anyway) wandering around like drooling idiots from a B-rate zombie movie, looking for Pikachu, or whatever. “Braaaaaaaains.” No, no brains to be found here, I’m afraid. But to call it a death sentence for black men? What do you even say to that sort of stupidity? Do black men spontaneously combust upon loading the app onto their phones? I found Jigglypuff! *BLAM*.

It’s an idiocy that has exceeded the dumbassery of lesser beings. It is the sort of intellectual diarrhea that could only be spawned from the mind of someone who thinks themselves educated and enlightened, for no lesser form of ignorance is sufficient to produce it. No, the sky isn’t blue, says the intellectual. Because blue is racist, since cops wear blue sometimes. If my ass had an ass, and that ass expelled a load of fecal matter which, itself, was able to take a dump, only then would you reach the level of mental sewage this creature has, somehow, managed to expel from her mouth, distill into typed form, and display on the Internet.

Does she take pictures of her turds swirling in the bowl too, I wonder? And does Vox.com post that, also? It would be a step up from this.

It doesn’t, at least no more so than it endangers the lives of other idiots wandering around like drunken zombies looking for Jigglypuff in between the legs of an Atlanta stripper at 2 in the morning.

But Akil’s explanation makes a lot of sense, and it is incredibly sobering. Akil says he rushed to download the game and try it out but quickly realized that its “augmented reality” interface also replicates the systemic racial inequalities of our regular, un-augmented reality:

Yes. I want you, dear reader, to let this one sink in. Pardon the shit analogies, both literally and figuratively, but I know of nothing more appropriate for this bile. This is a special sort of turd, the sort that, despite its foulness, and the gut-wrenching pain that led to its expulsion, must be grudgingly admired for its level of fecal perfection. What disgustingly unhealthy excuse for nourishment produced it? How, indeed, did something so flawlessly vile and nasty come out of a human being? What birthing pains were labored in its creation?

How, indeed, can any human being come to the conclusion that reality itself is racist? Let it sink in. Admire the perfect idiocy of this thing. Take it in. And then wonder how this human being can manage to put on pants in the morning, much less tie her own shoes.

Why, I’m sure that police will be mortified to see an idiot staring into his cellphone, looking at stupid shit. Indeed, this could not possibly have ever happened before someone dumped this game onto the market, right?

Anyway, what does this tentacled, eldritch vagina want to do about it? If you’re black, no Pokemon for you?

A lot of people are making jokes about how the National Security Agency probably created Pokémon Go as a spy tool. Others are genuinely concerned about the potential ramifications for privacy and civil liberties:

Well, privacy concerns have some legitimacy here. I don’t want to install this crap on my phone either. But what the hell does this have to do with her premise that reality is racist, therefore no Pokemon for black people?

Another Pokémon Go user had a story about police and racial profiling in a viral post on Imgur. He said he’s a white man in his 40s who started bonding over Pokémon Go in a public park with two young black men — and was promptly questioned by police who thought they might be conducting a drug deal.

It ended happily, with the cop downloading the app himself. But it’s unsettling to think about how easily it could have gone the other way.

So an unconfirmed personal account of a police officer questioning people, who then decides to be interested in the game. THE TERROR. THE HORROR! JIM CROW! SLAVERY! POLICE BRUTALITY! How in the hell do these sorts of people manage to go anywhere, or do anything? Does Emily Crockett shiver in her boots when a policeman says “good morning”? Does she quake with fear if somebody talks to a black person in the park? Does tying her shoelaces fill her with dread and fears of racist oppression? Why, the shoelaces might be white!

The level of stupidity these people call upon goes beyond the merely slow, or uneducated. It is a special brand of willful, knowing ignorance. And in the normal course of human affairs, this might be called a contradiction. A paradox of stupidity, as it were. And yet, there it is, before our very eyes, crawling up from the deep crevices of Karl Marx’s anus. Pokemon is racist. Reality is racist. Everything is racism, sexism, and homophobia. All of creation, the universe, and space-time itself has turned against black people. And for proof, we are supplied with a personal account of a cop asking about a crappy game from a couple of guys in the park.

I am reminded of the idiot who said calling a singularity a “black hole” is evidence of systemic racism in the academic community. Say what? No, the only singularity here is the hole inside your skull, which has sucked all possible intelligence into a parallel universe, and left nothing in its wake.

I took a breath this morning. Racist. My friend has a black car. Racist. Somebody right now is trying to find Pikachu in his toilet, and only succeeded in finding the floating relatives of one Miss Emily Crockett. Social Justice is an example of what one man termed a “Shit Midas”, a being which turns whatever it touches into excrement.

Miss Emily Crocket, congratulations on your achievement as Idiot of the Week, and Official Shit Midas of Vox.com. I proudly present to you four Golden Turds in recognition of this supreme achievement of cosmic stupidity.