On a more lighthearted note, it can be pleasing to see someone get their just deserts. In this case, the only flaw is that the deliverer of righteous fury felt bad after the deed was done. I’d be celebrating. Observe:

I work in an office with around 20 people and we all use the same fridge.

We’ve had problems for months with food going missing and no matter how many passive-aggressive notes management put out or naming of cartons/packets; shit keeps going missing.

One day some greedy shit eats my ENTIRE portion of leftover lasagna I’d brought in leaving me with no lunch and I was mad as hell.

As a hobby I am a competitive chili eater and I have experimented with making my own chili sauces so I have some 5,000,000 scoville extract in my cupboard (357 Maddog extract) and decided to lace some food with it and leave it in the cupboard. I got a pack of 3 sausage rolls, lifted the pastry off of one of them, dabbed several drops of extract at one end and put the pastry back on top and back in the packet. Revenge is a dish best served red fucking hot.

I have one hell of a tolerance to hot food and in hindsight this was a DUMB idea even if I was super mad that someone had eaten my lunch. I was bad and I feel bad.

2 days later my colleague (it turned out to be the fat gal in the office) starts screaming in agonizing gastronomical pain and we have to call an ambulance for her. She is legit having seizures and vomiting and crying and everyone in the office is freaking the hell out She was taken to hospital by ambulance and discharged a few hours later (thankfully) once the pain had subsided.

TL;DR Someone stole my food, I put them in hospital

The author purports to feel bad for putting this woman in the hospital, but note how effective the defense was: food no longer goes missing in the office. This was a fat woman who, by virtue of her fatness, clearly did not need to be scarfing down her coworkers’ lunches. She wasn’t starving, obviously. And she kept right on doing it until she met unpleasant consequences.

Bravo, good sir. Keep up the good work, and stop feeling bad about it! 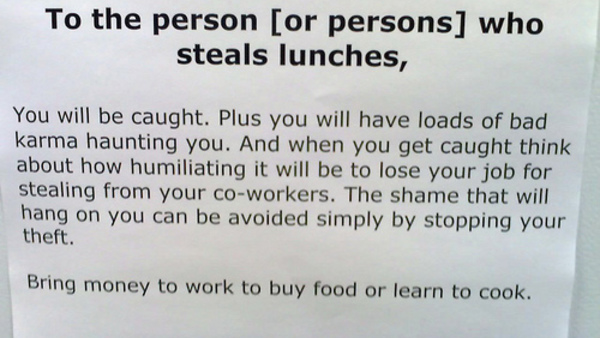