Some Hope for the Future

Most of my musings have a decidedly negative tone. We live in a civilization in decline, so that cannot be helped. Nonetheless, there are bright spots on occasion.

Oliver Campbell is a gamer of some stature. He runs a website called Top Game Review. He has been one of the leading figures of #GamerGate, at the front of the charge against the Social Justice phenomenon.

He’s also a Black Man. Normally this would be of trivial importance, because, despite all my posts on crime statistics, etc… a person is not his skin color. But here, it is important because he tells the world what a White Man can longer say.

It’s a fact. When a White Man says this, he is decried as a racist, a privileged person, an oppressor or whatever Social Justice buzzword is currently in vogue. But when truth comes from the mouth of the “oppressed minority” they cannot so easily dismiss it. It contorts their worldview into knots.

But Mr. Campbell has more to give us.

The great lie of Social Justice advocates arguing against gamers is that gamers are racists, sexists, homophobes, etc… Nothing could be further from the truth. Again, nobody believes the White Man when he says it. But coming from Mr. Campbell they have no choice but to reexamine their mythos. 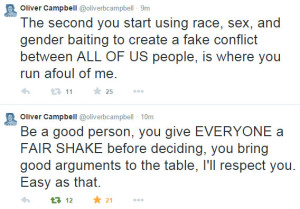 God, I wish this man was leading the Black community instead of Jesse Jackson. And that was not an instance of taking the Lord’s name in vain. I really mean it. I don’t even know his political persuasion, but it doesn’t matter to me at this point because he has sense, he can be reasoned with. Race baiting Social Justice Warriors can’t be reasoned with.

Mr. Campbell is still not done. 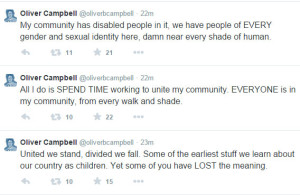 And the reaction from everyone has been positive.

I do not personally know Mr. Campbell, but I can almost imagine him standing on the pulpit, delivering righteous wrath upon the sinners. And it gives me hope. We’re still doomed, but we’re also not alone in our fight. Others fight with us for our civilization and our values. And, as Mr. Campbell tells us… he came from the ‘hood. If you can come out of that and deliver the truth to 9,000 twitter followers in #GamerGate, then nobody has an excuse anymore.

Update: Mr. Campbell is STILL not done. Check this out.