If you are following my Twitter account, you have no doubt noticed the kerfluffle between myself and a gentleman (I use the term very loosely) named Phil Sandifer. This man describes himself as a “Post-Modernist Marxist Occultist,” which, in some twisted fashion, does make some kind of sense. After all, you would have to believe in the occult to think that Marxism can be made to work without a hefty sacrifice in blood. Perhaps that is what he means by his self-identification as an occultist, he proposes to sacrifice the blood of millions to bring in the great Utopia?

Anyway, I digress. The central point revolves around a question. He asked me what I thought about Hegel’s “Tripartite Anatomy of the Notion.” This is an overly-embellished way of saying Hegel’s three point logic system. Now, Hegel’s logic system is quite nearly indivisible from the man himself. Hegel attempted to apply the system to very nearly everything. He considered it axiomatic. He applied it to the natural sciences, where it failed miserably. He applied it to the socio-political arena where, in the form of his successor Karl Marx, it similarly proved to be a failure.

Karl Popper explains the failure for us:

Hegel achieved the most miraculous things. A master logician, it was child’s play for his powerful dialectical methods to draw real physical rabbits out of purely metaphysical silk-hats. Thus, starting from Plato’s Timaeus and its number-mysticism, Hegel succeeded in ‘proving’ by purely philosophical methods (114 years after Newton’s Principia) that the planets must move according to Kepler’s laws. He even accomplished the deduction of the actual position of the planets, thereby proving that no planet could be situated between Mars and Jupiter (unfortunately, it had escaped his notice that such a planet had been discovered a few months earlier [Hegel was trying to refute “Bode’s Law”, a simple mathematical progression which implied that such a planet might exist]). Similarly, he proved that magnetizing iron means increasing its weight, that Newton’s theories of inertia and of gravity contradict each other (of course, he could not foresee that Einstein would show the identity of inert and gravitating mass), and many other things of this kind. That such a surprisingly powerful philosophical method was taken seriously can be only partially explained by the backwardness of German natural science in those days. For the truth is, I think, that it was not at first taken really seriously by serious men (such as Schopenhauer, or J.F. Fries), not at any rate by those scientists who, like Democritus,’ would rather find a single causal law than be the king of Persia’…

Hegel’s three part system begins with a thesis, or “being” if you will. I.e. something is. It then continues on to an antithesis, or not-being. I.e. something is not. Aside from being rather blindingly obvious, that things can be or not be, so far so good, right? Well, Hegel’s system has a third part, synthesis, that encompasses “becoming.” So we can say that his system is described thusly: being -> not being, encompassed by an intermediate stage of becoming.

This is where he goes wrong. And in this, you can see a sort of prototype for Marxist dialectic. Marx proposed that Feudalism would give way to an intermediate state, Capitalism, and then proceed to Communism. He regarded Capitalism as the “becoming” stage. The problem here, of course, is that the intermediate stage is a thing in itself! I.e. it is being. Hegel applied this test to the concept of life. He regarded life as a contradiction, because one must die. Thus all of life could be regarded as a “becoming” stage in which one is at varying levels of life and death.

It doesn’t work. I am alive. Tomorrow I may be dead. It is an either/or proposition with no intermediate stage possible — certainly not one which encompasses all of my life.

Now, this is admittedly an oversimplification. I do not propose to cover Hegel completely in one blog post. But I do wish to point out two important facts:

1. Hegel was a crock and his three part logical system failed every test to which it was known to be applied.

2. Marx was a Hegelian himself, and thus Marxists are, themselves, Hegelians, with all the philosophical baggage that implies.

Of course, none of this is relevant to the immediate argument Phil Sandifer proposed. Phil, I suspect, is simply angry that I half-jokingly referred to myself as a “Philosopher-DJ” in the FAQ section of this blog. He and some of his Twitter followers have engaged in a sort of circle-jerk, wherein they quote Hegelian or Marxist concepts in overly flowery language in order to feel smart and superior to the evil Capitalist Disc Jockey. As is typically the case with SJWs, this not about having intelligent conversation regarding Hegelian philosophy, it is about them feeling good about themselves. 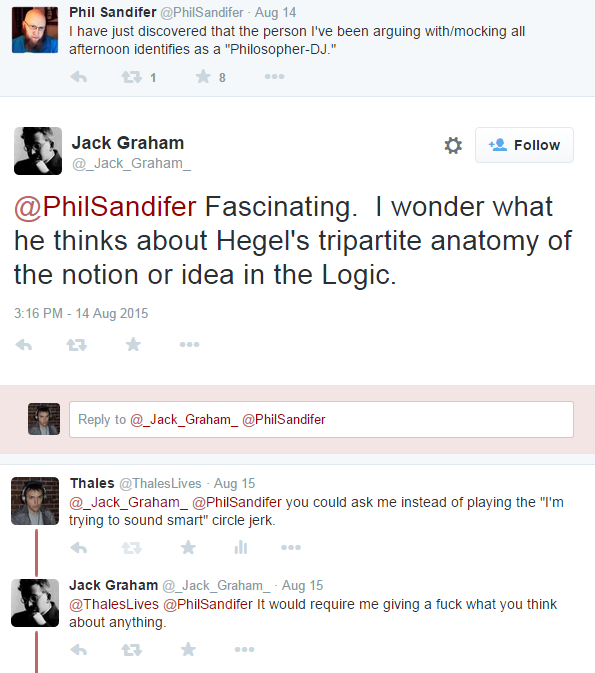 Such charming Leftists, aren’t they?

Anyway, I digress again. The point being, that these individuals seem to have it in their head that no one is allowed to disagree with them, certainly not a lowly DJ. They continued with their smug, smarmy, self-applied superiority complex by insulting the very man who is largely responsible for teaching me about Hegel, Marx and much of philosophy in general:

Vox has a saying. SJWs always lie. In this case, I think SJWs always project. I provide a link to my philosophical mentor’s writing, whose works I have read in their entirety, and he thinks I have just randomly Googled it (does that make a difference as to whether or not Dr. Ross is right, I wonder?). It makes you wonder how often he randomly Googles things and then claims to be an expert in them.

In any event, Phil doesn’t desire intellectual debate, and most of his replies have questioned whether or not I have read Hegel or Marx, or have any real knowledge of them or their work, rather than my opinions and citations on Hegel’s three part logic system. You see, he cannot fathom the idea that a non-Marxist might be familiar with Hegel and Marx, and not take them seriously.

He then proceeds to discuss Debord and the Situationists like they are some kind of religious icon. He reverts to all caps or nasty language whenever they are mentioned, such is his anger that nobody takes them seriously, either:

This really amuses me. This is not a man to be taken seriously.

On a side note, if any of my readers are interested in Dr. Ross’s work, he is former Professor at California State University, and he is not a Leftist (you might consider him a Right-leaning Libertarian). That alone should be considered rather shocking. He is something of an Agnostic in matters of faith, but his writings on the history of Byzantium and the history of Philosophy are absolutely superb, and among the finest in Friesian philosophical tradition. Honestly, these should be books in their own right, but he provides them freely, and if you email him, I find that he is always happy to engage in intellectual debate and explanation.

Dr. Ross is largely responsible for converting me away from the madness of Marxist thought, and that is no minor thing.