SJWs drool over the possibility of disarming the American citizenry. It is their most important goal, for even they realize that their path to total domination of American culture, government, and life will require them to do this, at some point. But I am, on occasion, reminded that the SJW Left doesn’t really understand us. To them, the idea that we would actually fight back is ludicrous. After all, were they in our position, they would not fight. Fighting is not their way. 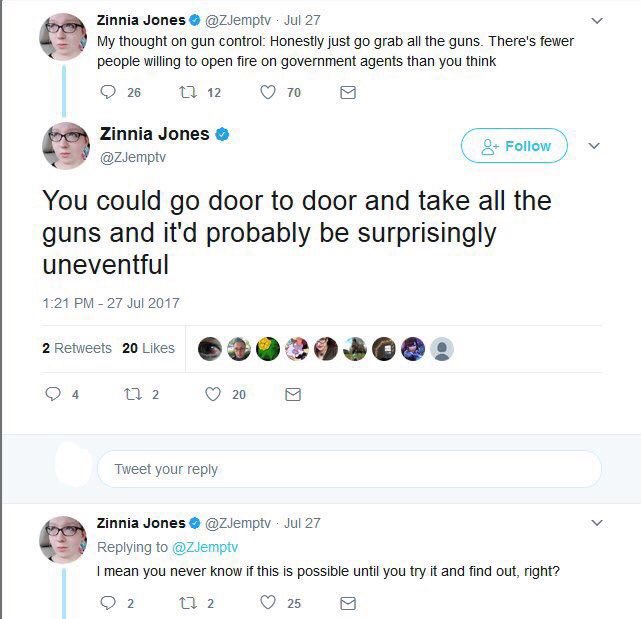 Amazing, isn’t it? Zinnia Jones doesn’t understand how this would actually go down in practice. For one, people would need to be found who were willing to confiscate the guns. Does Zinnia propose to use the military for this purpose? They will not execute this order. At least, not enough of them would. It is possible some police forces, or federal agents might be found to do it, however. Then again, perhaps not. Even those who are inclined to agree with Zinnia’s ideology are likely to understand that the action is extremely risky.

Now, supposing a force could be found to execute the order, would it be as Zinnia claims? Would Americans just surrender, door-to-door, without fighting back? The answer has a few parts. One, some might do so, out of fear for their families and such. But once it hits the airwaves that the government is doing this, the rest would bury their guns and/or decide to fight back. It would only take a couple incidents going bad for resistance to be inspired. Once again, the military is not likely to intercede on Zinnia’s behalf.

What Zinnia proposes would result in either Civil War, secession, or some form of insurrection. But, being an SJW, disconnected from reality, he doesn’t understand this. He only sees people submitting to implied threats (we will kill you and your family if you do not give up your guns). The very thought that some would choose to fight, and that others would choose to hide, is anathema to him. After all, he possesses no such courage or ability.

But, as we can see, SJWs don’t have a good understanding of weapons, either: 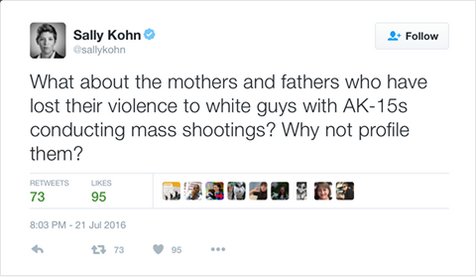 After all, does anybody have a mythical hybrid of an AR-15 and an AK-47 called an AK-15? It’s also funny when they refer to a handgun as an automatic, not understanding the distinction between semi-automatic and automatic. Their knowledge of weapons is very poor, so it would be foolish to assume that their knowledge of the people who own them is much better.

But to all of these idiots, only one thing needs to be said: Molon Labe. After all, if Zinnia Jones is so stunning, brave, and courageous for being a transsexual, certainly he should be able to muster the courage necessary to confiscate the guns himself. He should be the first one to knock on the first door. And, since he is against guns, he should be unarmed when he attempts this confiscation.