Many of my readers may be aware of the fact that, though I live in Florida, I’m pretty well-traveled. My father was in the military, and as a military brat I’ve lived in many different parts of the country, and been to almost all the lower 48 states at some point or another. We spent a couple years in Oregon when I was a teenager, and even back then the law prohibiting citizens from pumping their own gas was in effect. It was one of the stranger features of Oregon.

Now the partial repeal of this law, which only applies to rural areas, has some Oregon residents in a panic. Why, people may just have to get out and pump their own gas! The terror! The horror! I have to wonder if Democrats will get up on podium and tell us that people will die! This is another feature of that parallel (or is it orthagonal?) universe libs live in. Poe’s law may apply to the comments below, but it’s very hard to tell these days. 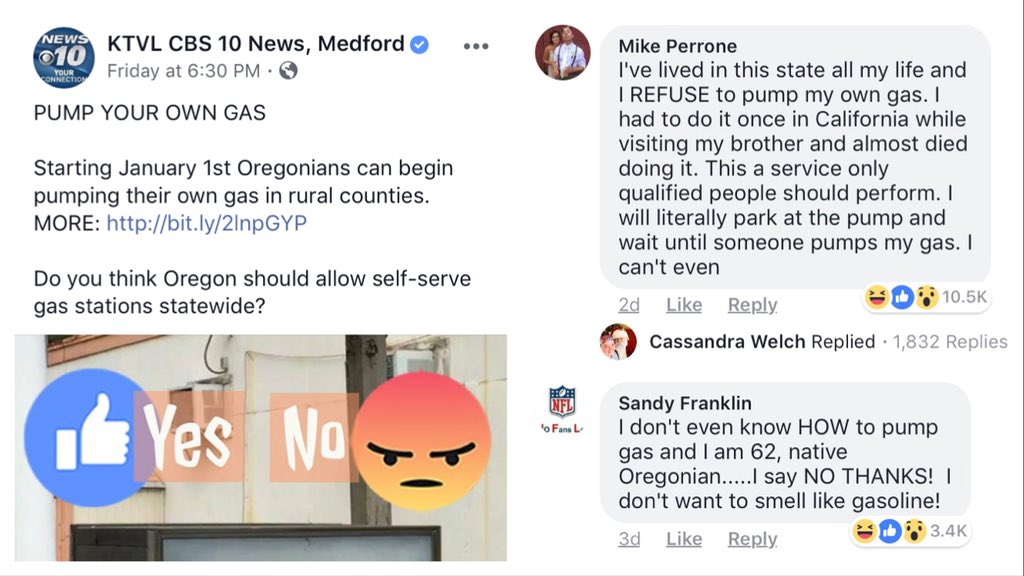 Either way, this is a very interesting case to dissect. Pumping gas is hardly rocket science, and yet somehow Oregon felt compelled to pass this law, and its partial repeal is engendering resistance. It boggles the mind. How can a people become so dependent as to be unable to pump gas? Never mind the fact that this merely allows for self-service gas stations, it doesn’t mandate them.

Every place I’ve lived has had at least a few bizarre, retarded laws like this one, though. My own Florida has a strange law where liquor cannot be sold between 3AM and 7AM, which is extended in Tampa to 3AM to 11AM on Sundays. On top of that, there used to be a law whereby you could buy a 32Oz and 128oz beer growler, but not a 40oz or 64oz. I am told there is a small town in Texas which has, for reasons I cannot fathom, banned the presence of inflatable gorillas. The specificity of such laws is amusing. You have to imagine there is some kind of story full of human idiocy, corruption, and bureaucratic overreach as to how they came about in the first place.

But Oregon’s law on pumping gas strikes me as one of the most egregious and bizarre of them all. That it has defenders is mystifying to me. I try to think of it in terms of Chesterton’s Fence, but all the reasons I can think of for its existence are ludicrous. Was it another simple make-work scam by the government? Was it a demand for safety that went haywire (the other states get along just fine without such a law). It’s hard to get a clear answer. Probably both, and then some. Either way, the people who erected this particular fence were out of their damned gourds.

It also demonstrates the difficulty of repealing idiotic laws once they’ve taken root. “It will take away jobs,” is the reason the above article cites for where the resistance really comes from, but that is an idiotic assertion. It is the sort of answer that takes into account only first-order effects, avoiding consideration for the fact that these jobs are artificial in nature, sucking productivity from someplace else. It’s a variation of the broken window fallacy. People have “jobs” but aren’t really doing or contributing anything. And they suck down money that could be going somewhere else, someplace actually productive. But now there is a class of people who directly benefit from the law regardless of its lack of utility, and pulling them away from the benefit is like pulling teeth.

It has a similar effect on the citizenry at large. Unaccustomed to pumping gas, you have Oregonians who don’t even know how to do it, and are literally afraid to do it. In some of my earlier writings, I made fun of a guy I saw on the side of the road getting his tire changed by a woman. He’s nothing next to people who say they can’t even pump their own gas. Government dependency is an ugly thing. If the trajectory toward increasing micromanagement of human affairs continues, I wonder if we’ll see a day when wiping your ass requires a special, qualified ass-wiper to do the job. You know, so as to ensure there are no filthy butt cracks in the country, and to provide make-work jobs to some (probably not well-liked) demographic.

Either way, Leftists have lately told us that the recent tax cuts were going to kill people by the thousands, if not millions, and that the Net Neutrality repeal would bring about the digital apocalypse. I guess we’ll see what 2018 brings. Maybe millions of Oregonians will die trying to pump their own gas, right? I mean, who knows?