As some of my readers know, I am part Armenian by ancestry. It used to be a thing that didn’t enter into my daily thought process, for I am also partially of English descent and am fully American, in culture, language and appearance. Armenians can generally tell that I am of Armenian ancestry, but few others can. But as militant Islam made its presence felt, increasingly in recent years, that identity has resurfaced because of the connection my own family has to the affair.

Then I saw this photo of a drowned Syrian boy: 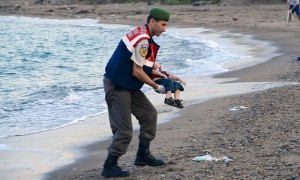 This photo was intended to provoke a reaction, and it did.

Leftists would have you believe that us on the Right have no empathy. We wish to deny the endless migrations away from crisis areas in the Islamic world and that, they would tell us, is incompatible with human rights, dignity, empathy and so on.

My grandfather told me stories of Armenia (Armenians, then, lived throughout Anatolia), which he remembered only dimly. Mostly, he remembered it through the stories told in the Armenian exile community.

Entire villages were erased, all the inhabitants slaughtered, the buildings burnt to the ground, the movable wealth stolen and melted down. Nothing of them remained. In the days before the genocide, two dialects of the Armenian language existed, colloquially referred to as the Western, or Anatolian, dialect and the Eastern dialect. The Western dialect has mostly gone extinct, spoken only by a few elders in the diaspora. My grandfather could speak it, but my mother knew only a few words. Only the Eastern dialect survives. Half of Armenia ceased to exist.

These were hardy Christians who had survived on the edge of the Byzantine and Islamic worlds for centuries. They had fought alongside Greeks and Crusaders. They were among the earliest — perhaps the very first — nations to convert to Christianity. They spoke an ancient language, a variant of the Indo-European language set that appears distantly related to Greek, and unrelated to any other.

Now that Christians in the Middle-East are approaching extinction, the new target is the insufficiently Muslim. The Yazidis with their syncretic half-Muslim religion, or the Kurds who elevate their own nationalism over their religion (a rarity in the Muslim world).

I feel for them. I really do. In fact, I cannot tell you how much it pains me to see these things. On my grandfather’s knee, I heard the stories of Armenian survivors. In particular, one woman stands out. She was a child when the Turks came for her family, but she was comely and pretty. Her parents and brothers were killed and she was sold as a slave for a wealthy Turk’s harem. Her story of survival and escape was terrifying to me as a child, and it instilled a sense of resolve where Islam was concerned that has not abated to this day.

Can you imagine this? Seeing your family slaughtered, and only surviving to be used as a sex slave by those who did the deed? Blacks in America lecture me about my White privilege, saying that their ancestors were slaves. Mine were slaves much more recently than theirs. Mine were slaughtered wholesale.

But back to the central point, why, then, if America sheltered my family, must the West turn back the refugees of Syria, of Somalia, of Libya?

Because they bring the source of infection with them. Armenians had managed, through some strength I sometimes find difficult to fully grasp, to hang on to their European culture and Christian religion through millenia of conflict with Islam. They had stubbornly resisted assimilation into Islam and its ideals. These refugees, for all that my heart yearns to give them sanctuary and a place to escape to, nonetheless carry Islam with them.

There are good Muslims in the world, and I want to make this clear. My own family lived only because an Ottoman official warned my great-grandfather that genocide was coming. This man, whose name I cannot remember — something that genuinely pains me, for my grandfather died when I was young and his stories are almost dream-like to me, now — paid for the ticket to America for my family, for English language lessons, and everything else needed to escape before it was too late.

I hope that I will meet this good and righteous man in the life to come. I hope God saw fit to accept him into His kingdom.

But Islam nonetheless is a contagion, even if some maintain a stubborn moral immunity to the infection. Where Islam goes, this violence will follow. You will never save all the little boys, you will never stop the slaughter. All you will do is bring it to your own shores.

And if there is something I know for certain, it is that my ancestors did not escape Islam only to see their descendants fight it again, once more in their own homes.

There were tears in my grandfather’s eyes, at times, as he recounted the things he knew. And I know what his reaction would be to this boy’s death. He would feel empathy and sadness, far more acutely than the moral busybodies of Progressive Leftism. But then he would turn off the TV and tell me the truth: that we could not help them without also dooming ourselves to the same.

So, Leftists, take your Weaponized Empathy elsewhere. We understand that the world is full of terrible things, of children dying, of women enslaved. But we have to find our resolve and protect our own.

For if we do not, it could be my son laying on that distant beach, and that I will not allow.