#GamerGate: A Line in the Sand

I was a latecomer to the #GamerGate affair. Oh, as an interested party, I had been aware of it since the beginning, but it took a long time for me to comment on the issue. The reason, of course, is that I am not as hardcore about my gaming as many who are involved.

That isn’t to say I am a casual gamer either. Recently, I built an arcade cabinet out of plywood. That isn’t for the “casual” hobbyist, I can assure you. I play the same sort of games “hardcore” gamers play, I just play them less often. My time is much more limited. I have a family, a job that consumes a great deal of time and I am also a DJ. It’s a balancing act.

Not for the faint of gaming heart, I assure you.

Yet, this is also why #GamerGate is also so important to me. In the old days, if I accidentally played a terrible game, what of it? I had the time to burn. Today, I rely on the community, on reviews, journalists and ratings to help me decide which game to invest my time in. I have to trust that these people are being truthful in their assessments.

The Zoe Quinn affair proves that they are untrustworthy. Oh, Depression Quest isn’t the sort of “game” I would have been interested in anyway. But if journalists could be seduced into covering something that bad favorably, then how much of what I’m reading is complete bullshit?

But that was only the beginning of #GamerGate. Once the Social Justice Warrior crowd got involved, accusations of sexism, racism, transphobia and pretty much any other SJW buzzword were lobbed into the fray. This revealed a far greater threat to the gaming community than journalistic ethics.

Another SJW using their preferred battle tactic: censorship. This guy is basically saying “I won’t talk to you until you agree with me.” Because THAT is mature.

Gamers are some of the most diverse people I’ve ever known. Martin Luther King, Jr. spoke of the content of your character. Well, that’s pretty much all gamers are judged on. We don’t see each other, most of the time. I don’t know if the other person I’m fighting in Starcraft II is a man, a woman, trans, Black, White, Asian, etc… And I also don’t care. I care about winning the game, which is rare for me since I don’t have the time to invest  in order to become a Starcraft God. That, and somebody decreed it to be the national sport of South Korea (gamers are diverse, remember?).

Gamers are also used to being insulted, teased and trolled. Many of them were bullied as children. As adults… well let’s just say they don’t censor their opinions. Join a CoD game and listen in. A friend of mine once referred to gamers as “the only people more offensive than you.” There’s a lot of truth to that statement. Yet it is a general offensiveness. It is not targeted at your race or gender. It is targeted at YOU, personally. Believe me, I know. In the days of Quake 3, I was a hardcore camper, and very, very good at it. Everybody knows a camper is going to attract some serious hate. Should I start a support group for campers? Camper prejudice! 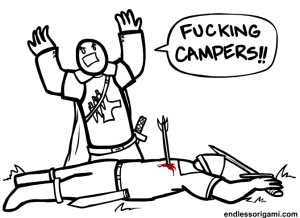 Yeah… I’ve heard this plenty of times. Campers get more hate than anyone in gaming. Period.

So trying to censor gamers is an exercise in futility. Furthermore, calling gamers names isn’t going to work on most of them. We’re too used to that, at this point.

But the issue is still huge. SJWs wanted to extend censorship to the games themselves.

One of the common accusations of the anti-#GamerGate crowd is that everyone is a bunch of Right wingers. That’s patently false. In fact, Libertarianism seems to be much more common than Conservatism among gamers (I certainly lean that way myself). And many #GamerGate supporters are Moderates or even Liberals, just not SJW Liberals. Ironically, in crying for censorship in games, and “diversity panels” the SJWs are acting more like Conservatives than #GamerGate supporters are. Hard-Right Conservatives aren’t terribly fond of violent video games, after all.

They want more women in certain roles, more trans people in other roles, more “people of color” here or there. They have a hard time understanding that gamers don’t care about these things. If gamers see a Black man or a Transwoman as a lead in a game, wonderful. Does the game suck? If it does, they won’t play it. If it doesn’t, they will. But I don’t want the creative freedom of developers hamstrung by a bunch of SJWs on a personal crusade.

I mean, would the Grand Theft Auto series of games even exist if SJWs were at the helm? Absolutely not. That would have been torpedoed on day one. But we all know they are fun. And that’s what matters. The SJWs attempted to use this incident as evidence of our prejudice, of our hate, in order to advance THEIR agenda. We are the defenders here, NOT the attackers, as they portray us. 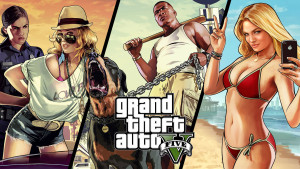 This game would not exist if SJWs had their way.

If Zoe Quinn had been a man sleeping with female journalists, what would the SJWs have said then, eh?

If we judge people on the content of their character then Zoe Quinn is a terrible person who made a terrible game. The journalists who took her “bribes” are similarly terrible people. And the SJWs trying to use this incident as cover for their censorship campaign are going to ensure that more terrible games, made by more terrible people, reviewed by more corrupt people, come to dominate our hobby. This cannot be allowed.

To that, I can only say: Fuck off.

To all my #GamerGate compatriots, whatever gender, race, creed and political persuasion, I can only say: Stay the course and we will win. 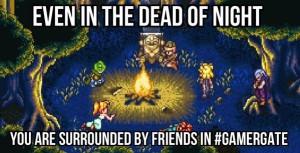 Lavos must die. Er… Anita and Zoe must be defeated.