My in-laws were asking me when I was going to start my son’s college fund, over the weekend, as my son had his first birthday party. I said “never.” I also explained that I intended, rather, to ensure that our family avoided debt and maintained assets and savings. They looked at me all puzzled. To them, college was a given. You just did it. That’s the way it was. And, to be fair, it once was that way.I suspect the higher education sector will implode long before my son reaches that age. And, in any event, I’m not sending him to go get brainwashed by these fucks no matter what the situation is.I genuinely believe the future of education will be more hands on, trade-school oriented. My father is an electrician, and he explained to me recently that he’s pulling $50-$60/hr on cakewalk residential jobs, because there are so few electricians. And, here’s the kicker, most of them are older than him! When they retire, that’s where the money will be. The trades that everyone has been neglecting for the last few decades.

It’s getting pretty bad these days. Awhile back, I was going to lunch with another developer friend of mine. When we got back to his car after eating, he had a flat tire. So he did what every modern American these days seems to prefer: he called AAA to come deal with the tire for him. I offered to just change it for him, because he had a full-size spare. But he insisted on waiting for the tow truck. He seemed incredulous that I would even offer to change a tire. After awhile I gave up and just walked back to work. He waited for like two hours for someone to change the tire for him. It was another one of those moments that struck me as a symptom of the Decline of the West. He had an Ivy-league degree, but couldn’t change a tire. And he wasn’t even particularly bad — he is even Conservative, a rarity among Ivy League graduates these days. I can’t imagine how bad his liberal equivalents are, now.Not only do people refuse the skilled trades, but they actively loathe learning anything that resembles physical work. At least my friend contributed something, through his programming work. And in fairness to him, he recently started a rental business and got a bit more hands-on with it. Most don’t even do that. They become middle managers, project managers, or some other sort of busy make-work. In the meantime, all the productive jobs are shipped overseas.Well, they can’t ship the trades, not all of them. Because, at the end of the day, somebody needs to change their tires on the side of the road. Somebody needs to unclog the drain or snake the toilet. Somebody needs to wire the low-voltage LED lighting that’s in demand in all the rich people’s homes these days, supposedly so they can feel good about themselves for saving the planet while running the A/C at 70 in the middle of 90 degree Florida heat.

I don’t know what my son will be, or what he will be good at yet. But I do know that more of the same from a failing “higher” education staffed with Social Justice Warriors and quasi-Communists won’t do him any good.

I sympathize with the concerns of my in-laws, but quite frankly, higher education has become a joke. Worse, it’s become a facility for brainwashing and indoctrination. If I were of college age today, I would eschew the campus altogether.

As Roosh put it on his Twitter account, these are the fruits of your $46,000 per year Ivy League education: 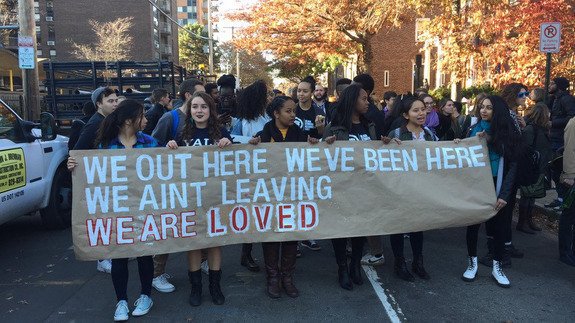 Francis occasionally calls me out on my various grammatical errors, but here we see that Yale students can’t even manage basic English. But we’re supposed to believe them on this intersectional feminism business, and entrust the management of our entire society to them. Riiiight.

My son deserves far better. When he’s old enough, I intend to introduce him to the philosophy of Mike Rowe. This “work smarter, not harder” catchphrase that drove higher education for the last several decades is a fallacy. Work smarter AND harder. And even if you just wanted to be smarter, college campuses are ill-equipped to provide even that much.