Recently, there has been some foofarah over the President’s food preferences. Namely, he likes his steaks well done and slathered in ketchup. The horror! The utter, unmitigated gall of a man to order food the way he likes it!

You know, it’s funny. My father still orders his steaks well done, and I’ve never quite understood why. Medium rare to medium has always struck me as the best balanced steak. I really don’t care for a bloody mess on a plate, so rare and blue rare are right out. If I wanted that, I’d just go to the Serengeti, chuck a spear at some wild animal, and eat the flesh raw. But well done, indeed, cooks out much of the flavor. So, yeah. Balance. But what business is it of mine to harp on a man for what he likes to eat? It is enough that I’ve my own preferences, and another man has his.

Food virtue signalling, or more aptly, food snobbery has been a thing for a very long time. And like political virtue signalling, it is all about display one’s superiority over another based on some irrelevant metric. “Look at me,” says the narcissist, “I’m superior because I like my steak rare.”

Of course, it is not merely steak that has suffered this effect. Wine has traditionally been a strong bastion of snobbery, but the practice has moved to craft beer. Now, again, don’t get me wrong, I like craft beer. For the longest time, I thought I didn’t like beer, because I found Bud, Coors, and Miller Lite to be foul-tasting  beverage abominations. But therein lies the point: I found them foul. Another man might like them. Indeed, even today these beers sell like hotcakes. Obviously somebody likes them.

If the President wants a Bud Lite, get him a damned Bud Lite. And just because you drink Dogfish Head 90 minute IPA (which I also find foul, by the way, as it’s a totally overrated beer in my opinion) doesn’t mean you are a better man, or have a more “elevated” palate, or anything of the sort. Here’s a great video about the irritating nature of the new craft beer snob types that have been popping up in trendy bars around the country:

Some years back, I remember reading about a blind taste test of wines, and a number of Napa valley California wines beating out French wines among the French. Naturally, the French were angry about this. You can’t virtue signal your superiority if you’re just rating what tastes good. Or, put in simpler terms, the French taste testers couldn’t cheat and give their own a leg up.

There’s this thought today that, like correctness in politics, there is correctness in food and drink. There is an Overton Window for acceptable steak. There are some steak places I’ve been to where ordering a medium steak gets me a dirty look from the server. As if to say “how dare you order cooked food from our establishment.” Given that Donald Trump likes his steak well done, I’m sure he’s dealt with much worse over the years.

Folks act like Donald Trump is afraid to try new things, afraid to eat superior food, or some such. It’s lunacy. More than likely, he’s tried his steak other ways in the past, and just likes what he likes. After all, if you like your steak rare for whatever reason, you’ll deal with a lot less dirty looks and peer pressure. Just like, it should be noted, that if you like your politics Leftist, again, you will deal with a lot less hate for it. 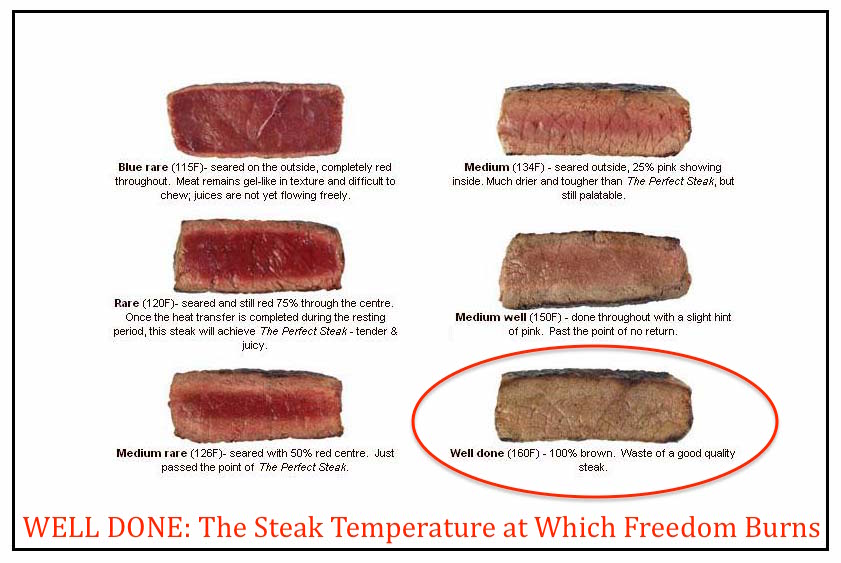 Rare has been deemed by the nameless food correctness authorities to be the *perfect* steak. Anything else is wrongthink.

This is past the point of ridiculousness. Not only must your politics be perfectly correct, according to some nameless, faceless, cultural authority, but your food and beverage choices must be also. Or else, as some outlets have implied, you are not qualified to be President.

I wonder, however, if the people who push such narratives of correctness even believe any of their own bullshit. Do people really prefer their steaks rare in such mass numbers? Or are a healthy percentage of them doing it because the snooty server at the fancy steak place will give you a dirty look if you order anything else?

How many craft beer snobs drink the beer for taste, and how many drink it because it’s trendy? I suspect a great many folks do this out of trendiness. When I went to Germany some years back, I noticed that some of my favorite German beers were incredibly cheap there. I filled up on beer, let me tell you. I remember walking through the aisle of a kiosk store there, and seeing bottled water selling for a higher price than some of the best beers in the world (again, in my opinion). Amusingly enough, German purity laws regarding beer probably meant the water in the beer was probably of better quality than the actual bottled water. But never mind that. I had a great time at the breweries and such.

But one thing that stood out to me was how normally the Germans regarded their beers. To them, this was just how beer was. If you wanted one, you drank one. People weren’t sitting around sniffing their glasses, or some theatrical bullshit like you see sometimes in American craft beer bars.

If you like your beer, you can drink your beer.

It was that way in America, once too. Sure, our beers were probably crappier in those days, but I do miss the idea that if you liked a certain kind of beer, nobody cared. I wonder if steaks were once that way too. Wines, of course, probably weren’t, but we can blame the French for that. Though if you read your Bible, you’ll notice how wine didn’t seem to be a big deal in Christ’s day. Certainly the Messiah didn’t see the need to sniff the cork and aerate the wine before doing whatever with it.

For a bunch of Leftists who once tried to ride the wave of prole resentment into Communism, it’s something of an irony. Their behavior has much more in common with aristocratic disdain for the peasantry than any sort of “workers of the world unite” bullshit.

Apparently, you can have infinite number of genders, my friends, but you must order your steak only one way.