A few days ago, the media attacked Donald Trump for his habit of ordering well done steaks. Naturally, I had a lot to say on the topic, as snobbery of any form grates on the nerves.

Little did I realize that Nicholas Nassim Taleb was going down a similar road at more or less the same time. He captures the essence of food snobbery here:

I once had dinner in a Michelin-starred restaurant with a fellow who insisted on eating there instead of my selection of a casual Greek taverna with a friendly owner operator, his second cousin as a manager and his third cousin once removed as a receptionist. The other customers seemed, as we say in Mediterranean languages, to have a cork plugged in their behind obstructing proper ventilation, causing the vapors to build on the inside of the gastrointestinal walls, leading to the irritable type of decorum you only notice in the educated upper classes. I note that, in addition to the plugged corks, all men wore ties.

Dinner consisted in a succession of complicated small things, with microscopic ingredients and contrasting tastes that forced you to concentrate as if you were taking some type of exam. You were not eating, rather visiting some type of museum with an affected English major lecturing you on some artistic dimension you would have never considered on your own. There was so little that was familiar and so little that fit my taste buds: once something on the occasion tasted like something real, there was no chance to have more as we moved on to the next dish. Trudging through the dishes and listening to some b***t by the sommelier about the paired wine, I was afraid of losing concentration. I costs a lot of energy to fake that I was not bored. In fact I discovered an optimization in the wrong place: the only thing I cared about, bread, was not warm. It appears that this is not a Michelin requirement.

It’s fascinating because it’s so true. Most high-end restaurants I’ve been to operate more or less as Taleb describes them. The server will spin a line of bullshit about the wine pairings, lecture us on the acidity of this or that, and attempt to sell us on the exclusivity of the place. Everything is unnecessarily complex.

There have been exceptions, of course. There is a high-end steakhouse near where I live called Bern’s Steakhouse, and it apparently has some renown, given that out of town friends often gravitate toward it. In that case, the place lived up to the hype. The steak was excellent, among the best I’ve had, along with what is probably the best french onion soup I’ve ever tasted. But the building itself is sort of run down, and the wait staff doesn’t lecture you on the menu, or the pairings, or any of that garbage (this despite having one of the largest wine collections in the world). And the menu is simple. You go there for steak, and the accompanying sides, and that’s pretty much it.

But such unassuming high end restaurants are the exception, not the rule. For the most part, be prepared for a lot of pretentious bullshit about why complex ingredient lists and overpriced wine is proof that you have an elevated palate, that you are special in the way those dirty unwashed masses aren’t. As Taleb puts it, they have corks plugged up their asses. It must be uncomfortable.

I couldn’t imagine living that way.

As Taleb tells us, this extends beyond food, however. When people get to thinking this way, everything must be complex, special, expensive, and out of reach of the unwashed masses. It’s about differentiation, thinking yourself better than others.

When people get rich, they shed their skin-in-the game driven experiential mechanism. They lose control of their preferences, substituting constructed preferences to their own, complicating their lives unnecessarily, triggering their own misery. And these are of course the preferences of those who want to sell them something. This is a skin-in-the-game problem as the choices of the rich are dictated by others who have something to gain, and no side effects, from the sale. And given that they are rich, and their exploiters not often so, nobody would shout victim.

It’s not just when they become rich, however. It’s when they start to climb above the teeming mass of humanity. Remember when Hillary Clinton looked positively baffled by a beer tap, when looking to do some kind of misguided blue collar photo op? There she was, with a fake smile and a beer glass full of foam, looking for all the world like she would rather be anywhere else. 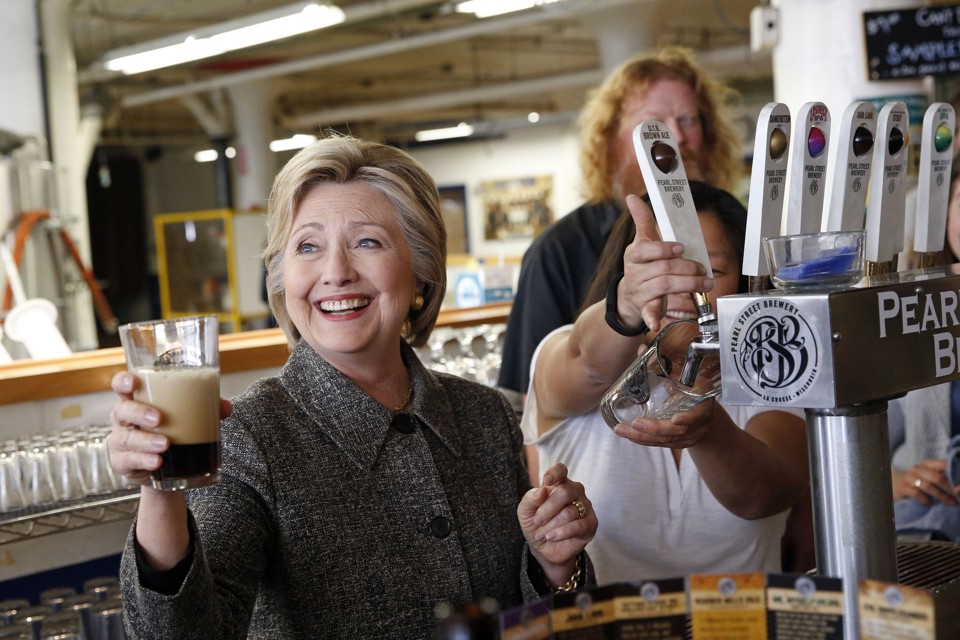 Beer, you see, is the peasant’s drink. Unless you’re becoming a beer snob, I suppose. Either way, though, it’s too simple and plebbish for a refined power broker like Hillary. I bet she’s one of those women who sniffs the cork repeatedly before deigning to pour a glass of wine. Oh hell, silly me, what am I saying? She probably pays somebody to pour the wine for her.

I think most Americans daydream on occasion about what they would do if they were supremely wealthy. I asked one of the redneck gearheads at the local muscle car meetup about what he’d do with a few million bucks.

Simple needs for a simple man, I suppose. No Ferraris or Lambos for him. He just wanted to go fast, and to hell with the rest of the bullshit. There was no talk of servants, or mansions, or outings to the fanciest French restaurants. It was all about the go-fast.

Nicholas Nassim Taleb explains that even if the costs were reversed, he’d prefer a pizza over the bazillion-course microscopic servings at the fancy place:

Let’s return to the restaurant experience and discuss constructed preferences as compared to natural ones. If I had a choice between paying $200 for a pizza or $6.95 for the French complicated experience, I would pay $200 for the pizza, plus $9.95 for a bottle of Malbec wine. Actually I would pay to not have the Michelin experience.

Of course, this isn’t to say that if you genuinely liked the complex food that it’s somehow wrong to eat it. Neither, should it be noted, should you forgo the Ferrari if you can afford it, and if you really want one. The key is to avoid the artificial narrowing down of your options, in some misguided attempt to signal your superiority:

Many have been mistaking this idea for an advocacy of Spartan choices rather than something about the restriction of freedom.

If you’re poor, you can have the pizza, or nothing. If you’re rich, you can choose the pizza or the fancy food, as you prefer. You should not say no to the pizza just because someone is trying to sell you on the superiority of complex food. Neither should you deny yourself the fancy shit, if that’s what you really want.

But whose desires are you satisfying at that point?

I’ve found in my short time on this Earth that most people espouse things that aren’t them in spades. I used to think it was a drive toward artificial conformity, you know, the traditional cliquish high school behavior writ large. But I find that this operates in reverse, too. At times they choose something precisely because they don’t want to be associated with some group. Ask any Mustang guy what he thinks of the Chevy Camaro. Buying a Mustang is as much about avoiding being a Camaro driver (jokes about mullethead, Miller Lite drinking GM guys abound). And the wealthy patrons of Michelin’s don’t want to be seen crawling around some neighborhood pizzeria. That’s for plebs!

It’s funny, because the virtue signalers often spout cliches like “be yourself!” You first, asshole.

All of this is artificially restrictive of choice. Becoming wealthy is supposed to grant you more choices, not take them away, not pigeonhole a person into the sort of vapid, petty-tyrannical, I’m-better-than-you snobbery espoused by our political class.

And it makes you think. How much of what they say or do isn’t even based on their own preferences, but based on some kind of desire to signal superiority? Social Justice is signalling moral superiority. Food snobbery signals superiority of taste. And then there is the sort of Dunning-Kruger-esque desire to signal intellectual superiority by barfing word salad like the privileged cisnormative heteropatriachal conspiracy, or some bullshit. I mean, if you don’t like white guys, I’d actually prefer if you just said that. You’re still a racist shit, mind you, but at least you’re not a pretentious racist shit.

Put simply, if you like well done steak, order away. If you prefer pizza to Michelin’s, get yourself a pizza. And if all your friends are virtue signalling their food superiority, you probably ought to get new friends.