I’ve blogged for about 15 years – at some point, you start to lose track. Most recently, at Right As Usual, At Last – Retiring for Good, and Liberty’s Torch.

I also write – so far, a couple of short stories. I’ve also put up the first chapter of a work in progress – the goal is to have a book that boys might like to read – other than Harry Potter.

But, a perennial interest is politics and culture – and the intersection of the two. I was a 2nd-wave feminist, back when feminism wasn’t cool. For me, that was primarily working to open up opportunities for women in work and education. I drifted away when I had kids – that was a massive slap in the face with reality.

When politics and culture got REAL was in the aftermath of 9/11 (as it was for so many lazy, go-along folks). I read obsessively, trying to get on top of the news, and to make sense of the pushback from the Left. I really don’t know just how I stumbled upon right-of-center blogs; I just know that I had a sudden shock that the blogger was writing directly to me.

From that point, I started exploring ideas that I’d ignored before – about how the culture shapes politics, not the other way around. That to be for marriage and the family was not a bad thing. That the problems of many people were largely of their own making, and that they would latch onto any person – or party – arguing that they were a helpless victim of the Big, Bad Patriarchy.

I was not totally in favor of the 2nd Gulf War. I’d lived through the first, right after cable TV came to the small town we were living in at the time. I was so stressed, I went out several days before the attack started, and bought 10 skeins of yarn and an afghan needle. The result, a mixed blue and wine blend, I called my Afghan War afghan. Which, I gave to my son for his bed.

I had skin in the post-9/11 military activities – two of my kids were active Navy, and my daughter (and her future husband) was in the Army National Guard. For many people, the engagements after the Iraqi invasion was over were a minor sidenote. For me, it was more reason to worry. The smaller, not-fully-engaged wars have killed and maimed more people since WWII, than the full-on invasions. Many of them American citizens.

Today’s topic of interest was sparked by a post from Sgt. Mom, on The Chicago Boyz’s site. Like many of us, she has reached her limit of B$. She is Done with Feminism, and explains why.

Me, too – and not that over-hyped bandwagon that makes a woman a victim if she agrees to sex to advance her career, then decides the price was too high.

Feminism has devolved from a quest to level the playing field in work, education, and money access, to a Bitchy insistence that Womyn are the Queens of the Universe, and ALL MEN should Bow Down to Them.

From that original reasonable beginning, the twisted outcomes include:

Last, from the Sgt.:

Consider this my final kiss-off to current establishment feminism; nice to have known ya and believe me when I say that a female-ruled society would pure bloody hell, if it ever was or would be enabled. It would be somewhat akin to the hell of last week’s hearing for a new Supreme Court nominee – which for me was the very last straw.

No argument here – in my life, I’ve seen the best – and the worst – from women. But, until recently, I’d thought it unkind to speak of women as Literal Witches. 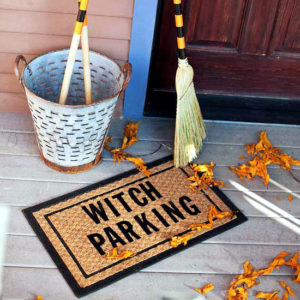