It is commonly understood by most folks on the Right that Feminism actively hates men and seeks to bring them down, not in the sense of creating equality, but rather, to create feminine supremacy.

What is more interesting, however, is that Feminism has gone so far past sanity that Feminists deny the existence of objective reality. They are like newborn babies, who have no concept that what they cannot see still exists. We play peek-a-boo with babies to teach them that when we are not visible, we still exist, and will return to be with them. We call this object permanence.

Now feminists are not quite this bad. They do generally understand that a person they cannot see still exists. However, they deny objective reality in other ways, feeling, like babies often do, that their emotions can change reality.

It is not hard to see where this comes from. A baby who screams for his mother, and who is then rewarded with her presence, comes to understand that there is an intrinsic link between screaming and seeing his mother. As a new parent myself, I can tell you that this conundrum is real, and difficult to deal with. You wish to encourage your child to communicate, avoid distressing him overmuch, and also end the screaming. At the same time you don’t want to encourage the poor behavior. So balance is necessary here.

But the Feminist doesn’t have any sense of this balance. Something bothers her, for whatever reason, and causes emotional distress. She then believes that her emotional distress is sufficient cause for reality itself to be altered on her behalf. Observe: 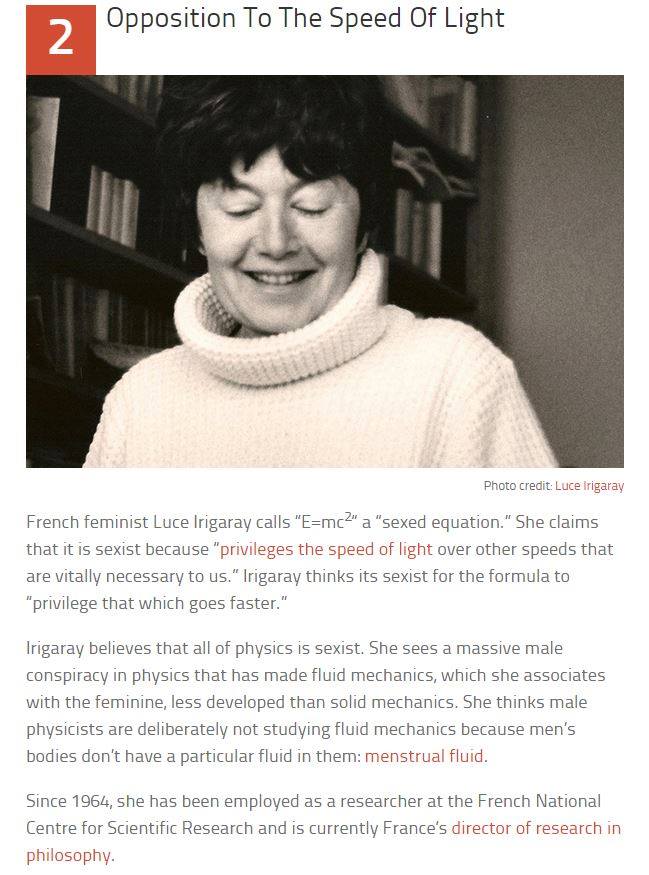 French Feminist Luce Irigaray calls “E=mc2” a “sexed equation.” She claims that it is sexist because it “privileges the speed of light over other speeds.” To say this is lunacy is to disparage genuine lunatics. Luce Irigaray is out of her f*cking gourd. She also believes men do not assign proper priority to fluid dynamics because it reminds them of menstrual fluid.

For some reason that is beyond me, this Feminist has assumed that her distress regarding the nature of physics, the description of the physical universe, is grounds for changing reality.

Now, not all Feminists are quite this blatant with their denial of reality, but we must still consider the case of the woman who believes that all sex is rape. Yes. If you have consensual sex with a woman, you are raping her.

Furthermore, as I have already discussed, Feminism denies the existence of beauty.

However, to illustrate my point graphically, take a look at this image of women taking baseball bats to scales. Why? Because, the scale does not lie. It tells the truth, it delivers objective reality. Naturally, if objective reality doesn’t feel good, it must be destroyed.

The 4chan caption is great: Why do they need bats to destroy those scales when they could just step on them?

Feminism stopped being about equality a century ago. It moved on to outright misandry, and now hates reality itself. It celebrates lies and buries truth, according to the dictates of emotionally-stunted women of questionable sanity and intelligence. But we are not done with Feminism today, for there is one other egregious example of reality denial left to discuss.

One Feminist has decided that sexually transmitted disease is perfectly fine. Indeed, she strips off her clothing to “raise awareness” about the disparaging of those with STDs. She does this to, in her own words, demonstrate that she is “not a slut.”

Let’s go over that again, shall we? This woman strips herself to declare that she is NOT a slut, and furthermore, declares that STDs are a badge of honor, as opposed to a thing to be ashamed of. Then she goes on to tell us that men who have dumped her for not desiring to infect themselves with Herpes are “douchebags” and her infection is a “douchebag detector,” and is thus of material benefit to her life.

Because, according to her, only quality men are desirous of infecting themselves with an STD.

Feminism is gone beyond merely hating men, it has decided to hate existence itself, because life isn’t an endless banquet in their honor and things don’t always go the way they’d like them to.

In this, my 10-month old son is already more emotionally mature than they will ever be, for at least he is showing signs of learning that screaming endlessly doesn’t always get him what he wants.