This business with the X-Men billboard proves that the Sad Puppies are right. What does a comic book movie have to do with a movement in Science Fiction? Everything.

You see, when the billboard featured a villain choking another character, you are seeing an important feature of any story: characters must face challenges. I mean, imagine a story in which the hero showed up, said “I’m here now, you should just give up,” and presto, the hero wins, the villain is defeated and everyone lived happily ever after.

Villain hurts woman. Isn’t that what villains do? What should he do instead? “I respect you as a woman, so I will let you kill me. Only the Feminists will survive.”

So when RadFems and SJWs (but I repeat myself) complain that a billboard features a villain attacking another character, I’m very confused. If women are to be the central characters in Feminist fiction, as the likes of Anita Sarkeesian and her ilk frequently demand, then they must face challenges, right? A woman character must fight, must be beaten down just as a male character might be, and rise to defeat her enemy.

Being a central part of the character’s journey, we would expect this to be a meaty part of the story right? Worthy of advertising it?

Except this is “violence against women.” Like the cover of a Batgirl comic which also triggered Feminist rage, wherein the Joker has clearly overpowered the titular character, any indication that the woman might lose, might suffer at the hands of the villain, cannot be allowed.

So what is allowed then? Must Batgirl walk up to the Joker and say “I’m a woman!” Joker then lays down, puts his hands behind his back, and the story ends. No struggle. No fight. The woman gets whatever she wants by virtue of being a woman. 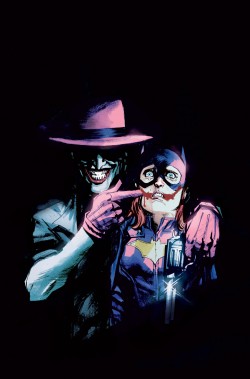 The joker is doing bad things to the hero. Can’t have that, right?

This is what the Sad Puppies have been talking about for years, and why they are understandably worried about the blatant politicization of fiction. They want to read and write stories where the protagonist must complete a journey, must face challenges and villains. Where the protagonist must find friends and allies, where struggle and suffering are part of that journey.

This goes for both male and female protagonists.

How can you have a story where the protagonist cannot suffer injury? Where the hero can suffer no physical attack, no setback, no violence? Imagine James Bond as a woman (as feminists are demanding currently) in this sort of scenario. Where James Bond was tied to a chair and tortured via the clubbing of his genitals in Casino Royale, feminists would scream were a Jane Bond subjected to the same torture.

What should the villainous banker to the world’s terrorists do, then, to get the money from Bond? Shall he say “I respect you as a woman, and I would never do anything without your consent. So I didn’t tie you up, and I won’t torture you. I didn’t take your gun either, since that would be a violation of your body. But I would like to know the password to the bank account, if that is not asking too much of m’lady.”

Then Jane Bond shoots the banker in the face, and the story is over. Some story, right?

This is the sort of executive meddling on behalf of Social Justice that Sad Puppies rightly fear. They don’t want their stories hung up by some misguided notion that certain demographics can never suffer fictional injury, that they can never face challenges. How can you write an entertaining (much less believable) story, hamstrung like that?

If you want to get technical, the billboard did indeed feature “violence against women.” But in the real world, violence against women happens. And in the fictional world you create, it may also happen. Indeed, a central part of the story may be a woman overcoming such violence to kill her tormentor. How is any of that bad?

And more importantly, why is any of it worthy of de facto censorship?