Everything Is Literally Hitler

A few points on this fine afternoon. The first is a post from my friend Nicki. The National Review decided to tar and feather Ted Nugent, metaphorically speaking, for some supposed anti-Semitic post he made. In today’s era of knee-jerk Social Justice outrage, the National Review decided to do a bit of virtue signalling to the Left, presumably because it wants to appear “respectable” in the eyes of the Left. I’ve never really understood this, but whatever.

Nicki is Jewish, and she decided not to merely accept the narrative, and went straight to the source. That’s right. The journalists and pundits at National Review couldn’t even be bothered to contact Mr. Nugent about the event. Too much work, I guess. And to Nicki’s surprise, Mr. Nugent responded directly. Again, a journalist at a major publication couldn’t do this. But regular folks could:

Yeah, I spoke to Ted Nugent on the phone several times, and we emailed a bunch as well. My son was green with jealousy, but thought I was the coolest mom ever. As a former radio DJ, I was a bit star struck myself, but more than anything, I wanted to know the truth. I wanted to know what was up. And as one of the founders of the Zelman Partisans, I thought we had a responsibility to get the whole story, because no one else bothered.

I’ll never bother with the National Review again. For a supposedly Right-wing publication, they do far too much of this virtue signalling. “See, Lefties, we’re not as bad as the rest of those meanie-head Republicans. We’re moderates!” Whatever.

Anyway, read the rest of Nicki’s post. Suffice it to say, she discovered that Mr. Nugent made a minor mistake. He didn’t vet the graphic he posted properly. It’s an understandable error. I’ve done it myself, more than once. I remember accidentally retweeting one of Ben Garrison’s comics that had been Photoshopped by the 4 chan /pol/ guys (who love inserting fascism references into things). Why? Because they did such a good job retouching it, I thought it was the original I saw earlier. Apparently this is an issue Ben Garrison has been having for awhile. Fortunately I’m not famous enough for the National Review to throw me under the bus for a single erroneous tweet.

Point is, everybody rushed to judge this man, and didn’t even get his side of the story. Because the moment somebody says racist, sexist, homophobic, etc… people’s brains just shut down, and their knees lash out with blinding speed. You’d almost think they were overcompensating for something.

People make fun of the tinfoil had conspiracy guys, but where is the laughter aimed at these people? They see Nazis everywhere. Tad Williams was sure that the Republican party was really the Nazi Party.

Here’s some really politically incorrect humor to that effect. Enjoy. 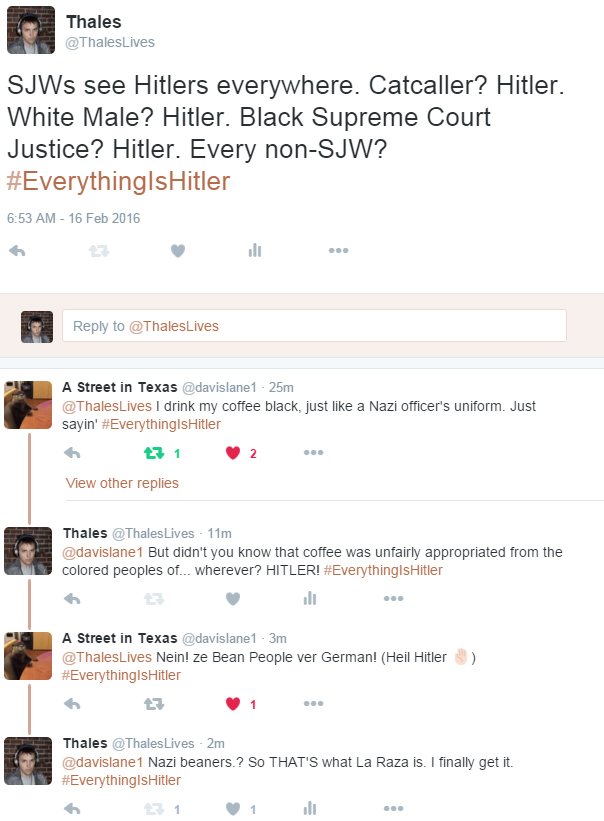