The End of Beauty

Late Antiquity and the Middle Ages produced a surprising amount of beautiful art. The book of Kells, the Cologne Cathedral, the Hagia Sophia and many more. These were a people suffering from reduced literacy, economic hardship and repeated invasions. But they still understood beauty well enough. Look at this, and tell me otherwise:

Third-wave Feminism and Post-Modernism is anti-beauty, and has embraced this hatred of beauty as the new orthodoxy. It tells women that they are all beautiful, sexy creatures (even when they are not). The movement considers bleeding on a canvas to be art, the Vagina Monologues to be theater and, worse still, this to be music:

As torturous as this is, you should see through the thing to the end. The commentary is worth it, and the “film” about destroying a female doll is similarly educational. This isn’t music. Morbidly obese women are not beautiful. Blood-splattered canvas is not art. Bashing a doll with various violent implements is not film. Society has lent its full weight of money, effort and “talent” behind the marketing of excrement.

Yet this isn’t the important lesson here. Rather, look at the production values of the show highlighting this symbolic foray into Feminist Music. The lighting is perfectly coordinated, the host of the show is cordial and professional. The women have little music stands in front of them, just as if they were producing the same sort of music as a professional choir.

The production values are perfect. The Content is crap.

This is an echo of pop culture, which is similarly devoid of content, but also packaged with utmost care and perfection. 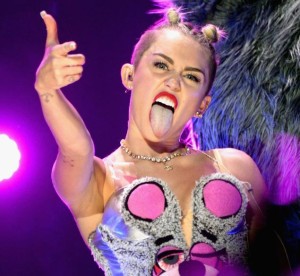 You will see fireworks, stage smoke, millions of dollars in lighting, stage trussing and electronic light shows. Designers will spend months crafting tour logos, promotional packaging and advertising. Thousands of people will be employed to record, manage and sell. The stage design is rather reminiscent of a church, actually. The altar is well lit, the figure standing in a Christ-like pose, often enough. 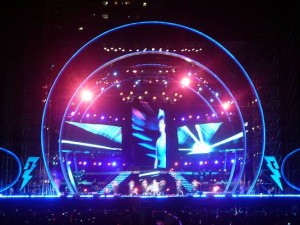 The new High Church of the West.

But the content is usually crap. Miley Cyrus sings a simple ditty written by a consortium of producers and critics. Somehow Mozart could write a symphony by himself, mad genius that he was, but modern pop songs require an army of producers to create a 12 note sequence more akin to a ringtone. She grinds her crotch or twerks her rear end in an outfit that barely conceals her nether regions. Fans scream, the radios blare and people pay hundreds for tickets. At the end of the show, they will describe it in words that make it seem like a religious experience. She was inspiring, they will say, the music touched my soul. Again, as if the figure jiggling her butt were the very image of Christ.

For the 2014 Holiday season, Cards Against Humanity offered Bullshit on its website. They were very clear about the nature of the product. It was literal bullshit, crap from a bovine professionally packaged and shrink-wrapped. 30,000 units were shipped. They sold like hotcakes. Some people were surprised that the product was actual feces, thinking that perhaps the company would place valuables inside the poop. They dug through the feces, disappointed they did not find a diamond in the roughage. Cards Against Humanity donated the profits, but they were small. The $5.99 cost for the bullshit was mostly eaten up in packaging costs.

When you consider the price of things today, you will find that packaging, marketing, sales commissions, and distribution costs far outweigh the value of the product in most instances. Generic cola costs $0.69 a 2 liter at Publix. Coca-Cola runs at around $1.49. The difference there is the packaging. The true cost of a Miley Cyrus concert is the staging, the promotion, the designers, technicians and producers. Consider the amount of money companies spend on Super Bowl ads. You pay for that.

And so, listen to the screeching, howling Feminists above and know that this the trajectory of Post-Modernism. Even a people who were crawling through the mud of the Middle Ages better understood beauty and art. It will be packaged, like the bovine shit, and sold to you at a high price. People will be “inspired” by it. Quasi-religious services will be conducted on its behalf.

But it will still be a turd.