I’ve spoken multiple times about the correlation between Islamic immigration and rapes. This subject fascinates me because it is a clear cut example of Progressive doublethink. Fraternities are condemned without evidence, and when the claims made against them are later revealed to be bogus. Due process suffers on college campuses. The possibility of false rape allegations is frequently dismissed in the service of the false statistic that 1 in 5 women are raped.

Yet the very obvious correlation between Islam and abuse of women is completely ignored.

Take a look at this video, a report from Germany, where 4 brutal gang rapes have occurred in the same city the last few weeks. In each case the perpetrators are described as “having southern features.” That, of course, is a euphemism for Arabic and/or Islamic.

I’ve spoken at length in previous posts about this phenomenon, as have many others far more notable than myself. Yet this all falls on deaf ears. There is weasel room in the statistics, as there is in most statistics. Correlation does not equal causation, they will say. And this is true.

At the same time, the anecdotal evidence confirms the statistics. We know with certainty that the rights of women in the Muslim world are far behind those of the West. So why is it a surprise that importing large numbers of Muslim men into Western countries is resulting in rape and abuse?

The Muslim migrants do not magically embrace Western law and jurisprudence simply because they step foot in a Western country.

But, while this goes on, Radical Feminists are busying themselves blaming a heart icon on Twitter for promoting rape culture and make the platform “less safe for women.” Seriously. 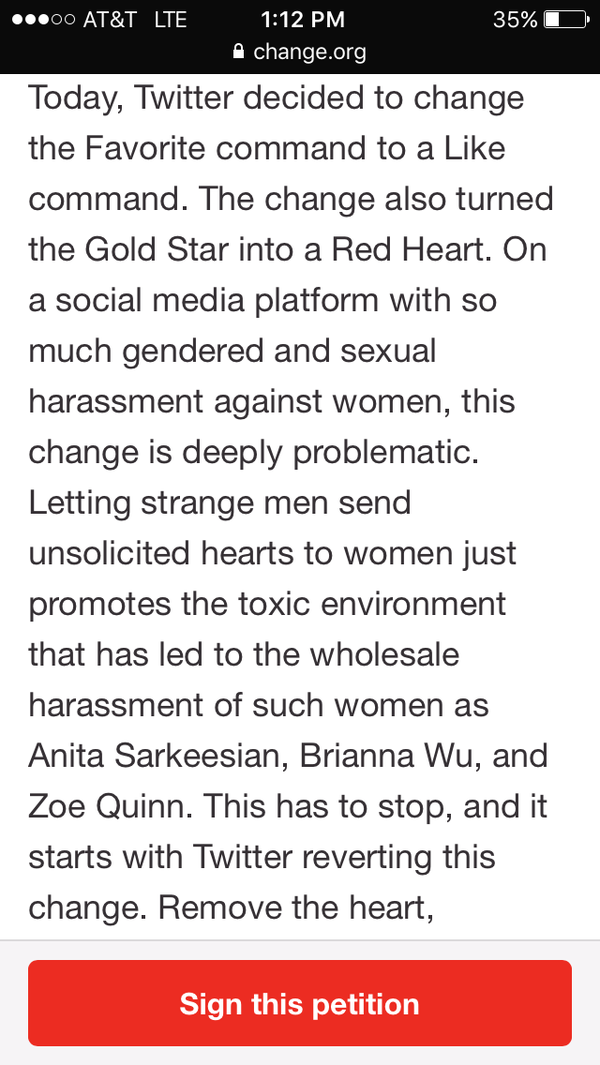 This is insanity, absolute lunacy. Those who honestly believe that Twitter’s heart-shaped like button is more of a threat to women than gang-raping Muslim migrants need to be locked in a padded room and medicated to the hilt. This is evidence of severe mental illness.

Notice, of course, the implied connection to #GamerGate here, too. And before you say “no, Dystopic, this is just one loony, or just a troll. Nobody is that stupid.” There’s more…

These things are everywhere, and they spend their time denouncing men on Twitter for disagreeing with them, considering the matter the equivalent of violence against women or outright rape.

Muslims, naturally, are rarely mentioned at all, and if they are it is only to illustrate how Evil White Men have been oppressing them since the Crusades. Because, naturally, a war that was over centuries ago is far more relevant than violent gang rapes going on today.