Knowing When to Move On

Decline is visible everywhere in the West, in every cobwebbed corner, lurking in every scene. For those of you who don’t know, my other life is spent in Goth clubs, spinning a blend of Dark Trance, Industrial and EBM music for a crowd that is best described as somewhat alternative. These small microcosms in the music industry are really the last bastions of creative art left in the industry. Yesterday’s post on the End of Beauty should serve as a warning, but in these smaller niche markets, some beauty still remains.

I have been a DJ and occasional producer under various names, most lately as Dystopic. You won’t find me on major festival lists and I don’t share the fame of some of the greats, like Imperative Reaction, Mind.in.a.Box, Combichrist or XP8. But my contribution exists, and whatever else, I enjoy the originality of the music and the creativity of this scene.

It is, however, of the latter band whom I wish to speak. XP8 is one of my go-to groups when I’m DJing. For those who have some experience DJing, I am not what is known as a playlist DJ. I mix (and remix) live, I learned to beatmatch the old fashioned way on turntables and old Pioneer CDJ500s back in the late 90s. And so I never really know what I’m going to spin until I spin it. Often times, I let the mood of the crowd guide me. Other times, pure whimsy. On occasion, however, I am left without any clear idea what to do, and it is in those moments that XP8’s music has saved me and my sets.

It’s a sort of default setting, music I can always rely on to be good, powerful and accepted by the Industrial crowd. And so the end of the XP8 project is something that saddens me. The duo declared the end of the project, and the end of their music careers by naming their final song “XP8 Is Dead.” 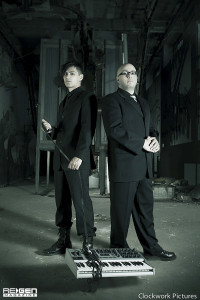 XP8 is Dead. No drama or actual death involved. They have decided to move on.

Bands and Artists fold all the time. What makes this different, you say? What does this have to do with the Decline of the West? A lot.

I guess the reasons can be already glimpses from the reply I gave above, but there’s more to that… music genres have life cycles, and I simply realised the time for “industrial dance”, that weird mix of dancefloor beats with a more gritty approach, was simply over. I said it elsewhere and I repeat it here, we had it good for fifteen years, that’s a long period of time: I went from being in my early 20s to the gates of my 40s, that’s a huge chuck of everybody’s life right there. Nothing stays forever, surely not a super niche genre like ours. And it is always wiser to understand when it is time to move on, because no one wants to be the old guy in a room full of kids looking at you like a dinosaur: I remember vividly making fun of those old goths that simply didn’t want to get the fuck out of MY clubs a decade ago, and the last thing I wanted to become was one of them.
I strongly suggest all the people of my generation to consider doing the same, because this scene was supposed to be young and vibrant, while nowadays anytime you walk into a goth/industrial club or festival, everywhere in the world, the average age is 35 and that’s simply wrong.

There’s a hint in here of what is going on. Music has always had a sort of cycle to it. Consider it a sort of generational affair, where young people, educated by the masters of old, introduce new ideas, then, in their turn, become the new masters to educate the next age.

Only today’s masters, unlike Marco, are unwilling to give up their throne to the new crowd. As a DJ, I have seen night clubs become progressively older in demographics.  An endless series of comeback tours ensue. It’s like Toys r Us commercials used to tell us.

XP8 took the high road, ending their careers at a penultimate moment with, perhaps, the best releases yet. Marco explains it:

We played a very successful gig here in London last August, at Slimelight, to a sold out venue. That was our swan song, and I have some very nice memories of it I will forever treasure.

And so as Marco moves on with his life, he’ll remember ending his music career on a high note, to appreciating aficionados who truly enjoyed his craft. He won’t be a dried-out has-been, a Metallica releasing Reload, and challenging Napster. He won’t be Madonna, plastered in makeup, sounding like a chain-smoking gas station attendant humming off key in the shower. He definitely won’t be this:

He and Marko Resurreccion, the other half of XP8, were masters of their craft, a Kings of a very small little niche kingdom most of my readers probably never even heard about. But more important than that, they knew when it was time to step down.

They knew when it was time to grow up.

Sometimes I feel that my DJ career, a much smaller affair than XP8, is similarly limited. I have a few more years left in me and then my time will come too. Music production is a game for the young. But the clubbers will go on, getting older, long after I exit. 35 year olds, 45 year olds…

Perhaps in a few decades, the night clubs will look like nursing homes, wrinkled fists pumping in the air like nobody cares, the scent of beer and liquor mixed with mothballs. We live in an era where no one grows up, nobody moves on. It’s a perpetual adolescence, cradle-to-grave stunting of personal growth.

We live in an era where the King thinks he can not only stand on the shore and order the tide to stop, but that he can order Death himself away with but a wave of his hand.

I cannot tell you how much I admire XP8 for having the moral courage to do what others in my industry could not: move on and grow up. I will miss their music, nonetheless.