Some years ago, the powers that be decided to widen the old I-275 freeway through central Tampa. This was a stretch of road that dated back to the 60s and was long overdue for replacement. Work began in 2010 and is likely to continue well into 2017. Furthermore, it took over a decade to get all the environmental approvals and budgeting finished. The project was on the planning maps in the late 90s. I fear that by the time the freeway is complete, it will be halfway to its own obsolescence. Of course, I was not alive when the original roadway was constructed, but I have a hard time thinking that it took 20 years to build.

After 9/11, talks of a new World Trade Center were immediate. I think everyone in those days wanted to give a great big middle finger to Terrorism. Enthusiasm ran high. Early designs were impressive, both in height and architectural prowess. Word on the street was that construction would be expedited.

Of course, that never happened, and the final building was modern but bland, devoid of the architectural features originally envisioned. It took over a decade to get the approvals and build the structure. It’s hard to imagine, in America-that-is, that the Empire State Building was constructed in a little over a year, with equipment and technology far more primitive than we have available today. No, all the interesting construction is going on outside the Western World. 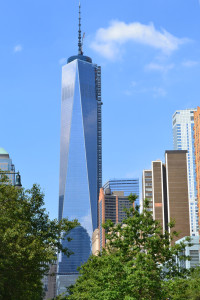 The sad fact is, the Burj Dubai of the Arab world is a more impressive building than One WTC. That’s not really a good sign.

Some weeks back, I was having a conversation out on the patio with a family friend. Over cigars and scotch, the usual topics of what to do about Latin America came up. If you are unfamiliar with doing business in Latin America, it is not so bad as the media would have you believe. Corruption is endemic among our southern neighbors, but it is usually a friendly sort of corruption. Civil servants are poorly paid, government revenues are tight, and so the only real reason to become a government official is to receive your due in graft. It’s wrong and greedy, but it is also human. If you want some cargo moved through port customs, why would the official want to help you? His employer treats him badly and hurrying your goods through is no skin off his back. And so La Mordida, as it is known in Mexico, is the norm.

Don’t misunderstand me. This is no argument in favor of such corruption. Yet, at least in Latin America, you can pay extra to get things done in a hurry. Money can move aside mountains of regulatory nonsense. And it is well-understood and direct what it will take to do something. In America, which has theoretically outlawed such bribery practices, the bribes are less obvious. You cannot merely hand a bureaucrat a pile of greenbacks and move on about your business, though now and again people try it anyway (the FBI takes a dim view of this, however). Social status is much more valued than money. If you are famous, the rules are different. If you are obscure, it doesn’t even matter if you have money. La Mordida in America is largely a social affair, not just a monetary one.

So if George Soros wants to do something, the permits will be waived, the inspectors will be generous and government will more generally be amiable. BP, as well known as the company is, certainly got away with pushing out EPA inspectors on their oil rigs, much to everyone’s chagrin when one such rig dumped its contents into the Gulf. Everyone else, including the construction company building out I-275, will be buried under a veritable mountain of paperwork and regulation. Things will still get done when they must, but it will take a decade to build a skyscraper and twice that for a freeway. The costs are necessarily higher as well. Even the regulators are angry, for at least their Latin cousins get something for themselves out of the whole mess. Misery loves company, and so frustrated inspectors are a bane on everyone’s existence.

Sometimes I am convinced that America, once the creator of Banana Republics, has become a Banana Republic herself. And our product is Social Status, marketed to the rest of the world, a mere collection of brand names and entertainers engaged in permanent debauchery.

Because even when we actually make things, we take ten times longer to do it and pay far too much.