Yesterday, I wound up getting dragged into another political “debate” on Fecalbook, and as is customary for such arguments, the bulk of my opponent’s replies were dedicated to implying that a mutual friend of ours is a Nazi. Of course, since I rose to his defense, that would then imply I was also a Nazi. All of this was because both of us supposed Nazis were ragging on media sensationalism. According to our intrepid Leftist, since Goebbels didn’t like the media, and we also didn’t like the media, we must be secret admirers of his.

At this point, I made it clear that I was sick to death of this incessant exaggeration and hysteria. It is like our country has gone collectively insane, seeing Nazis everywhere, and in everything. I’ve ranted about this issue before, but as I am wont do, at times, I decided upon some colorful invective. Observe:

Look, I don’t know your relationship to [our mutual friend], but this shit is fucking disturbing, man. Calling someone a Nazi is one step removed from calling a person a murderer. You better be damned sure you’re right before you open your talk hole.

“Somebody said the media sucks. Guess who else didn’t like the media? HITLER!” This is a stupid reason.

“Somebody said the media is more dangerous than a small group of nutjobs with tiki torches. He must like the tiki torch guys!” Also a stupid reason.

My man, if you want to fix the problems with this country, the divisive identity politics shit, the hate, the racism, you gotta start here, with people you know. I’m so tired of it, man. Nazi, racist, bigot…

Do you *really* think you’re helping the situation?

This is getting out of hand. No, it’s been out of hand. Now it’s gone straight to the loony bin. These people are acting insane. Keith Olbermann is a great example. Take a look at this tweet (which he subsequently deleted. Edit: it’s been pointed out to me that the top one *could* have been faked, if any of my readers have an archive.is link for it, I’d appreciate it. The rest are current on his Twitter feed), and a series of similar of recent tweets that are still extant on his Twitter account. He’s losing his mind. 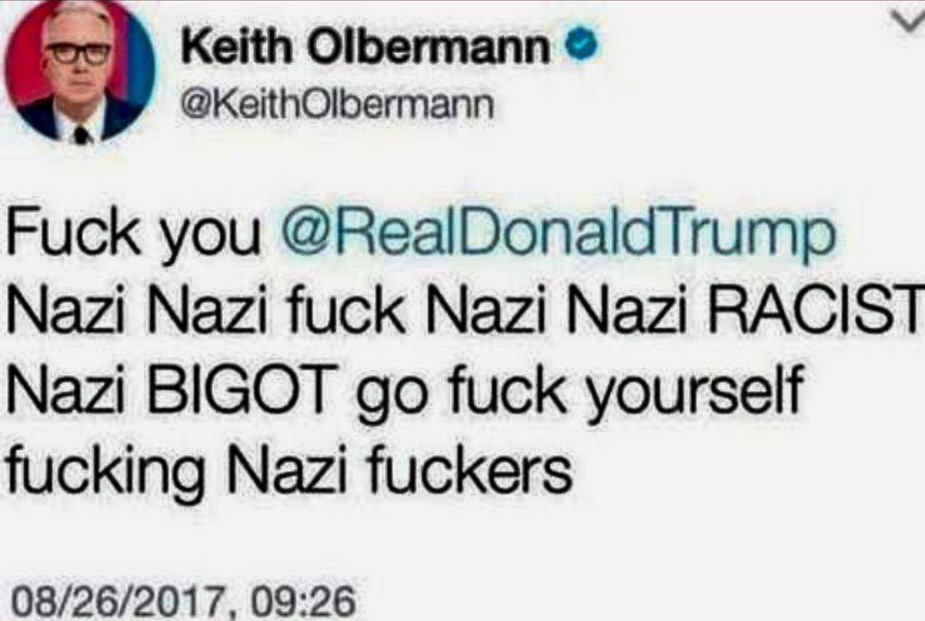 These are the ravings of a lunatic. A madman. Keith Olbermann has lost all touch with reality. And I suppose this wouldn’t bother me, except that his readers are likewise going insane. The Nazi hysteria has reached ludicrous levels. It’s like the Salem witch trial writ large, where everyone is presumed to be a secret Nazi on the basis of nothing. When will the burnings commence?

Our intrepid Leftist finally backed off after that reply. Perhaps because he realized I was in no mood to indulge his insanity. I doubt it will effect any permanent change in his hysteria, though one can hope.

We live in very bizarre times, where Marxists march in the streets calling themselves anti-Fascist, while acting rather like Fascists themselves. Where Nazi LARPers shop at Wal Mart and buy out all the Tiki torches. Where the media assumed that there are Nazis hiding under their beds at night, and where any difference of political opinion, no matter how small, invokes Godwin’s Law.

I would be surprised if Richard Spencer’s merry band of LARPers and the entire Ku Klux Klan and their hangers-on constituted one tenth of a percent of the American population. And yet here we are, where everybody suspects their neighbor of being a secret collaborator, a would-be Quisling, because they think CNN sucks, or deny that Hillary Clinton is some kind of demigod.

In better times, we’d have them all committed. And we could all have a good laugh watching Keith Olbermann get Baker Acted live on the evening news.

Alas, we do not live in such times.