Slavery exists. Right now. In America today. But it isn’t the sort peddled by the media. They will tell you about racism, or sexism, or whatever -ism is currently in vogue. A group will be called the oppressors, another the victims.

This isn’t the slavery I refer to. Debt is.

To understand slavery, we must go back to another multi-ethnic, hegemonic empire: Rome. The Romans were consummate slavers, and they had no care whatsoever for the race of the slaves or the slavers. It was entirely possible, for instance, for a Black man to become a Roman citizen and own White slaves.

They cared about money. Slavery was a debt that you worked off.

As expert slavers, the Romans knew that a relief valve had to be created. The carrot to go with the stick, as it were. For most of Roman history, it was possible, even common, for the slave to buy his own freedom. It was also common for free men to sell themselves into slavery, even for whole families to do this. This might seem like anathema to Americans today, but in those days a poor family might survive better under a master than on their own. And, indeed, selling yourself into slavery might provide the money needed to help your family prosper. A father might sell himself into slavery to provide a dowry and a good life for his daughter.

The relief valve was imperfect. Sometimes the impetus to slave was too strong and harsh, and a Spartacus-like figure would arise, desiring to free the slaves. Other times it was too weak, and the economy struggled for a source of cheap labor. This happened in the Western Empire in the fourth and fifth centuries, as Christianity excised the practice from the Empire. 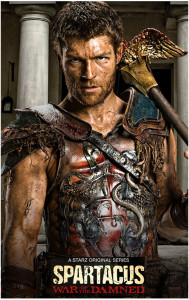 Spartacus. Let us just say that if he were alive today, he wouldn’t care much for bankers either.

Anyway, slavery in Rome was a system of mutual obligation. The master had to care for the slave, provide food, housing and the like. The slave was required to work for the master. The master often gave the slave great discretion in this; many were trusted advisers, artisans, blacksmiths, etc… Many were educated at the master’s expense, in order to be more useful workers. The slave might simply walk away from the master’s residence a free man (unless caught later — but that was more difficult then). But they didn’t, because life as a slave was often preferable to the alternative: life as a poor free man. And a pleased former master was a good person to have on your side. Slavers were rich and well-connected, generally.

Is this starting to sound familiar? It should. This is exactly how banking works in modern America. The bank provides you with the means to obtain a home, education, transportation, financial cushion (credit cards, etc…). In return, the bank owns your labor over a specified period. Oh, it’s more humane today than it was for the Romans. The chains are invisible, the accommodations much better than before. You can choose which jobs you wish to do, so long as the payments are made. But this is more a function of technology than any kind of sociological progress. It is more efficient in a modern context to do it this way. Overseers, whips, chains and fences are expensive, after all.

Like the slaves of old, one could do a great deal of work on the side. Any time not spent in the pursuit of the master’s orders could be used to work for yourself and collect savings. Many slaves, born into slavery, obtained their freedom in this manner. They paid off the debt to the master and left free men, often carrying along substantial savings to start a new life somewhere.

When I was a child, my grandfather used to take me into church more than I liked. I found the blathering sermons profoundly boring, as most children did. But I remember one in particular.

The pastor quoted a passage from the Bible dealing with the obedience of the slave to his master. He stopped to explain to the audience that the Bible was using terms in a different manner than we used them today. The slave was an employee, he said, and the master an employer, or a man to whom obligation was owed. Whatever else the Bible might be, it is a window into the ancient Roman world and its ways. In this, the book and the pastor were right.

You are slaves. You have debt, you have obligation to labor for another. And only when that debt is discharged and gone will you have finally purchased your freedom. Consider this next time you sign on the dotted line.