Weaponized Empathy and the Edge Case

Weaponized Empathy has long been a topic of discussion here. Today, let’s break down a very common use of it in private circles, in debates between regular folks on social media.

Conservative: I believe in [insert policy here].
Progressive: Here is a sad story about someone (or even a hypothetical someone) who would be affected by the policy. Do you want this person to suffer?
Conservative: Well, no, of course not…
Progressive: Well then, you shouldn’t believe in [the policy]. It’s immoral.

This is an exceptionally low bar to clear for the Progressive. No matter what political positions a person might have, at least some people, somewhere, can be found who would be negatively affected by it. If, for instance, the tax code were simplified, the poor IRS agents auditing people with a microscope for violations of their arcane system might lose their jobs. Or, perhaps some poor person somewhere might end up with slightly less from the Earned Income Tax Credit.

Clearly the Conservative then wants poor people to starve, and IRS agents to be unable to feed their families. This is, of course, a rather blatant example, but read on for a more subtle and more powerful version of the argument.

Once a negative example is trotted out, the Progressive declares moral superiority and thus victory in the debate. Clearly he is more moral, because he wants to make sure nobody slips between the cracks, and everyone gets their fair share of… whatever.

A classic example can be found in this debate with Ron Paul, wherein the liberal moderator trots out a hypothetical person who has “a good job” but somehow has no money, decides not to buy a healthcare plan, has no existing government aid, can obtain no charitable aid, and possesses no friends willing to help him, and is experiencing an expensive health problem. What would happen, asks the liberal?

The absurdly unlikely (but theoretically possible) scenario is thus implied to be proof that we need government-managed universal healthcare.

Conservatives need to stop accepting this low bar as evidence of anything. Time after time, I’ve witnessed Conservatives argue these types of absurd positions by positing equally unlikely ways the free market or charity will cater to all such edge cases. Once dragged down to this position, victory is impossible. The best debaters may score a draw, edge case vs. edge case. Everyone else will lose, and the Progressive will trumpet his moral superiority over the evil, greedy Republican Uber-Nazis until he is blue in the face.

Ron Paul, being a very smart man and a doctor himself, argued this thing to a draw. I doubt many others could have pulled this off.

This is the wrong way to argue the point. It is, in fact, tacitly accepting that the Progressive’s position that the edge case means anything about national policy in the first place. Progressive policies, even if they are theoretically universal in scope, will also be subject to edge cases, as the Charlie Gard incident demonstrated. In fact, one essential truth about government micromanagement is that it is likely to result in more such edge cases, not less. Bureaucracies aren’t known for their intellectual flexibility. More people will fail to get the care they need, not less.

But even that isn’t quite the right way to argue the point. Leftism is demanding a sort of universalism that simply isn’t possible in any human institution. And, invariably, when the institution falls short of universal perfection, it is excoriated by the Left and used as justification for giving them (as in the Progressives themselves) more power under the excuse that they are morally superior. It is nothing more than a blatant power grab, thinly disguised as a moral argument.

This must be challenged immediately in any debate with them that goes down the edge case path. “Are you demanding perfection? That every single person receive 100% of all needed care? If so, you are a lunatic. Hard cases make bad law.”

This moves the bar up a notch. Now the Progressive must demonstrate that his system is better at a meta level, not just an individual hard case level. Weaponized Empathy can still be deployed at higher levels, but this is generally much more difficult, especially given the fact that Socialism generally produces very poor results when taken as a whole. However, expect the next rung on the Progressive argument ladder to be something along the lines of “well, Nordic Socialism is just great.”

More on that argument later.

There is little I can say on this matter that my friend Nicki hasn’t said better. Folks, consider this required reading, insofar as I am able to convince you to read something.

This case sickened me beyond belief, because Nicki is right. The bureaucracy decided that the parents had no rights in this case. They had raised the money to seek experimental treatment in the United States, and the British courts decided that, even though there was no cost to the British taxpayer, the parents had no rights. They couldn’t even take their child home to die in peace with his family. I’m sure the experimental treatment was a long shot. It probably wouldn’t have worked anyway. But God knows, if this were my child, I’d fight to the last, to the most extreme chance possible. The public largely agreed with them, that’s how they were able to raise the donation money in the first place.

But the primacy of the State cannot be questioned by us mere peasants.

It’s disgusting. It’s sick and twisted. And from now on, whenever some Leftist insinuates that I am immoral for opposing state-run healthcare, I’m going to point to this incident and tell them that their sacred moral high ground is complete bullshit. Giving the State the power over medical treatment decisions is not morally superior in any way whatsoever.

I feel terrible for these parents. Not just because their child is going to die, but because they aren’t even permitted to fight for him. 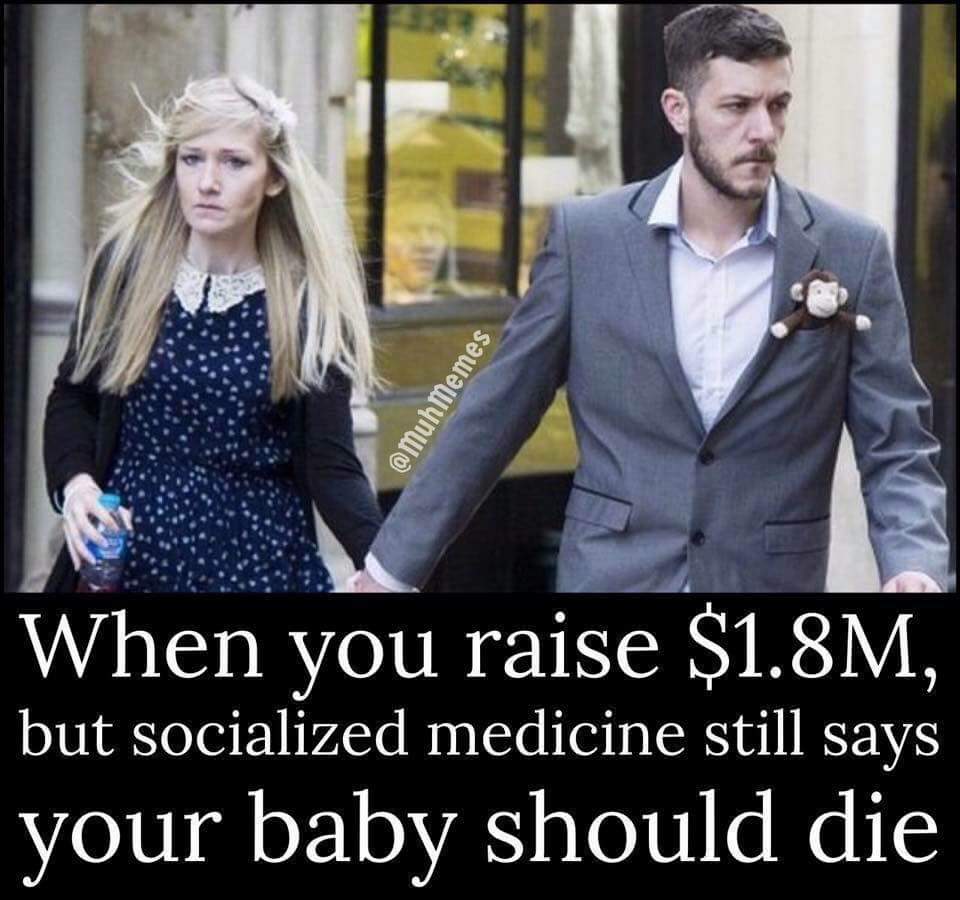 I posted this on Fecalbook, in reply to a long string of liberal Democrats gushing about the joys of Universal Healthcare. I presume I will be flamed for the response below:

Universal Healthcare sure does have a nice ring to it, doesn’t it? Everybody gets care, we get to remove a greedy middleman, the insurance companies, and democratize the medical system. No sick person left behind, and all that. It’s hard to argue against it from any kind of moral standpoint, because of the simplicity of the concept. It’s very seductive that way.

Thomas Sowell explained the problem with it in a similarly simplistic way.

Some folks are old enough to remember when healthcare was much more reasonably priced, when most common injuries and illnesses were relatively inexpensive to treat. Oh sure, things like cancer were still very expensive to deal with, but if you broke a leg or got bronchitis, it was cheap enough that even the poor could generally find a way to pay for it, perhaps with some assistance from charities and pro bono work.

These days, even a broken leg will typically cost around $2,500 at a minimum. Much more, if you use the emergency room. Strange, that it costs so much, or that healthcare cost increases have outpaced inflation for as long as I’ve been alive.

You see this in another industry, these days. Post-secondary education. Yes. College tuition and fees have exploded in cost over the last few decades. In fact, it is one of the few industries where the cost increases have outpaced healthcare.

Note, too, the drive to make college free for everybody. Universal Education. Has a nice ring to it, doesn’t it?

The common element to both is government involvement. Administrative costs in healthcare have exploded. Sure, doctors get a great salary, but most of the cost increase has actually been due to administrative burden. They have exploded since the late 70s, constantly outpacing the increase in doctor salaries.

Similarly, government involvement in student loans and college subsidization has exploded. Demand has gone through the roof, driven partly by the elimination of metrics like IQ testing, and their substitution with college degree requirements, and partly by the availability of government funds.

To put it simply, government has created the problem as it exists today. And now it proposes to solve it by granting itself complete authority over the industry. It proposes to do likewise with education. Eventually, I have no doubt we will see similar in other essential areas like housing and transportation. Housing will become too expensive for everyone (it already is in many metro areas), and government will need to run that too.

In the end, the moral argument is a way for the government to hide behind its real goal: power. Control.

Maybe it even delivers somewhat on its promises. Maybe a lot of folks will get the care they need. Or maybe it looks something like the Cuban healthcare system, where only the politically connected get what they need. Who knows?

But do you *really* trust them that much?