Castro’s Death and the Love of the Elite

So around 2 o’clock in the morning, on November 26th, we got the call from my father-in-law. Fidel Castro was dead, squatting over the coals in Hell. Most often, the Christian man would wish for someone to achieve a measure of repentance and forgiveness from the Lord as his life comes to an end.

I, on the other hand, must ask forgiveness for wishing nothing of the sort for this man.

There was celebration in Hialeah, where my wife’s family lives. An ad-hoc parade was on the streets not long after his call came through. A family friend captured this on video here, if you’re interested:

The most fascinating feature of Fidel’s death wasn’t the expected parades in Hialeah, or the celebrations of Cuban exiles and their descendants. It was, rather, the adoration and love expressed by our rulers.

Jimmy Carter had this to say about the Communist tyrant:

Rosalynn and I share our sympathies with the Castro family and the Cuban people on the death of Fidel Castro. We remember fondly our visits with him in Cuba and his love of his country.

Barack Obama, who famously attempted to hug Raul Castro, and posed in front of Che’s memorial was no less glowing in his eulogy:

We know that this moment fills Cubans — in Cuba and in the United States — with powerful emotions, recalling the countless ways in which Fidel Castro altered the course of individual lives, families, and of the Cuban nation…

…History will record and judge the enormous impact of this singular figure on the people and world around him.

No mention is made of the brutal dictatorship this man launched, the thousands murdered, and the millions exiled. Nothing is said of the property stolen, the economy ruined, and the rotting streets of Havana, once one of the most glorious of Caribbean cities.

The Prime Minister of Canada, Justin Trudeau, was even more lavish in his praise of the dictator:

“It was with deep sorrow that I learned today of the death of Cuba’s longest-serving president,” Trudeau said. “Fidel Castro was a larger than life leader who served his people for almost half a century.

“A legendary revolutionary and orator, Mr. Castro significant improvements to the education and healthcare of his island nation.

“While a controversial figure,” said Trudeau, “both Mr. Castro’s supporters and detractors recognized his tremendous dedication and love for the Cuban people who had a deep and lasting affection for ‘el Comandante.'”

Of course, there is a famous picture of Fidel holding Trudeau’s brother when he was a baby. The alignment of the political elites with Communism and tyranny has been a thing much longer than I have drawn breath: 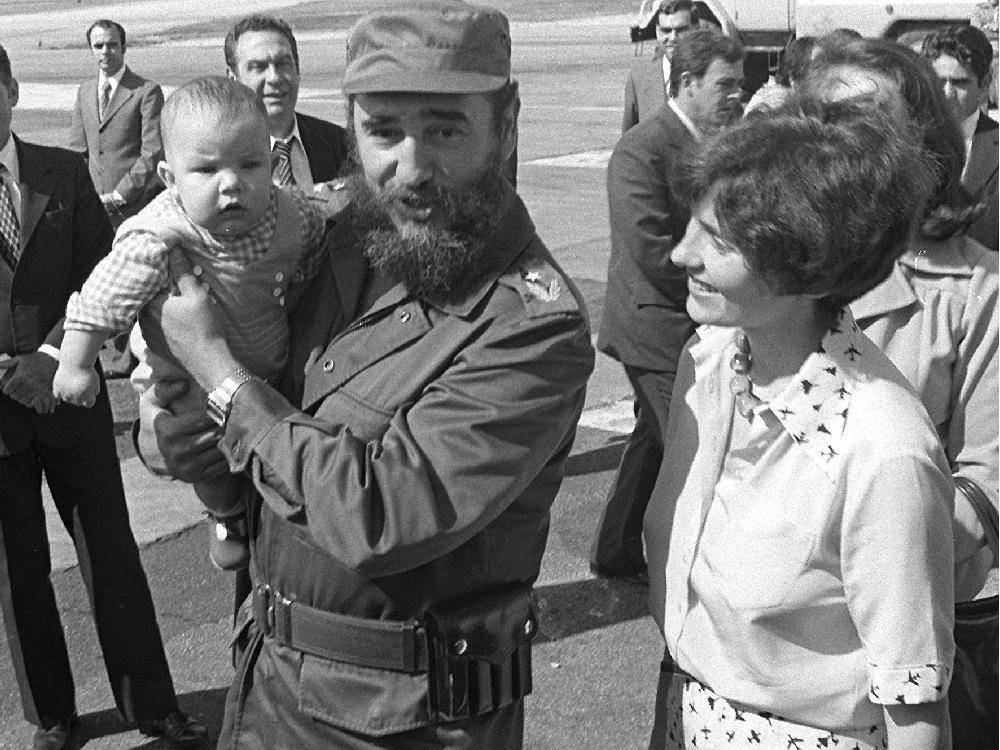 As far as I’m concerned, the only good Communist is a dead Communist. And in that, we might say that Castro finally became a good Communist. I do hope that someone flushed his ashes into the sewer, where they properly belong.

I have always despised Castro and other tyrannical Communists (but I repeat myself). However, upon meeting my wife and learning first-hand from my father-in-law exactly what life was like in Cuba, as difficult as it may be to believe, I came to despise Castro even more.

He spoke often of how, as a child in school, children were taught to regard Castro as their father, and to turn in parents who spoke ill of him in private, so that those people might be imprisoned or murdered. The children, of course, were rewarded with gifts for doing this — you can well imagine what such a system produced. A family friend once shared a film that showed his own uncle being executed by firing squad because of his political beliefs. The remainder of the family was fortunate enough to be exiled instead of murdered.

Don’t believe the people who say Castro didn’t do those things, or those who excuse him. He was a tyrant, and the only reason he didn’t kill more was because Cuba was a small island. A man like him in charge of a larger country would have slaughtered millions, not merely thousands.

Make no mistake, our rulers know exactly what men like Castro do, and they approve of it. Indeed, they can only dream of the day when they can take such measures upon us. Imagine if Hillary Clinton, for example, had the power to imprison or murder all of her political opponents on a whim. We all know how that story would end.

I had a taste of this on Facebook, where a fellow Industrial musician (who is much more skilled than I, mind you), Ted Phelps of Imperative Reaction, posted on the subject. He, too, married a Cuban girl and shares a disdain for Communist tyranny. Some of his erstwhile fans, however, most certainly did not share this view.

One decided to call Ted and his supporters Nazi Trumpkins, and proceeded to write on about how Communism is horribly misunderstood, and it is really Donald Trump who will kill millions and put them in concentration camps.

When cornered with well-sourced facts about the crimes of the Castro regime, our intrepid Leftist tried to escape with “well, nobody should speak ill of the dead.”

Sorry, when you found a brutal dictatorship that slaughters, imprisons, and exiles something like 20% of the population because of political beliefs, I will speak ill of you.

Trump followed that up a few hours later with a lengthier statement, in which he called Castro a “brutal dictator who oppressed his own people for nearly six decades” and said he hoped Castro’s death gave Cuban Americans “the hope of one day soon seeing a free Cuba.”

“Fidel Castro’s legacy is one of firing squads, theft, unimaginable suffering, poverty and the denial of fundamental human rights,” the statement said.

Whatever Trump’s myriad of flaws, he got this right. And that’s one reason why he got elected. People were exhausted of mealy-mouthed statements like Obama’s, or outright praise of murderous dictators like the compliments delivered by Jimmy Carter and Justin Trudeau.

They wanted the truth. And Donald Trump delivered that, at least.

But remember, folks. Our ruling elite has told us that Donald Trump is literally Hitler, and Castro was a wonderful visionary who loved his people.

Never forget whose side they are on.