Candlelight Vigils, Hearts on Sidewalks, and Other Progressive Magic

Virtue signalling is a form of Progressive magic, the thought that wasting time chanting and drawing chalk art on the driveway like a 3 year old will somehow banish the demons that afflict your society back to the Hellfires from whence they came. It is a belief in the supernatural sans God, that merely thinking something changes your reality, that all of reality is subjective, bending to the whims of your personal feelings at this particular moment.

Terrorist attacks deserve more than a bunch of people drawing hearts on the sidewalk, or putting flowers on some street corner. But meaningless gestures are all that the Establishment, Ivory Tower elites have left to a society more or less banned from doing anything that is actually effective. Discussing Islam and Weaponized Empathy critically is, of course, racist (this despite the fact that Islam is a religion and political ideology, not a race). They spread this hashtag “#BXLove” as if the ISIS-sponsored terrorists give a rat’s ass whether some effeminate Belgians make heart symbols with their hands and offer “love and support” to whomever needs it. To me, love and support means, perhaps, loaning me some ammo when I’m low. 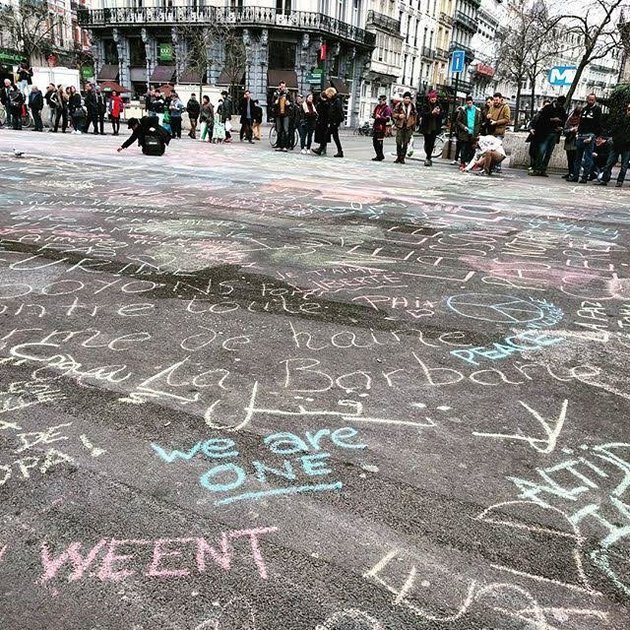 “We are one” they say. As if ISIS wants to be one with any of us. They want us dead, and our possessions and lands in the hands of a world Caliphate.

If a terrorist attack resulted in the death of one of my loved ones, I would not be looking for love and support of the magical Progressive variety. I would be digging for my rifle and ammo cans. I would desire justice, vengeance even (they aren’t the same thing, but nevermind that). I would want to even the score.

But these people just sit around and cry, or pat each other on the back for holding candlelight vigils and putting flags on their Facebook profile pictures. Je Suis Charlie, they say, except that two weeks later it is all forgotten and nobody cares anymore. Meanwhile, those of us with even a cursory understanding of history are just waiting for the next Islamic terrorist attack. The question is always when, where, and how many bodies. We never ask if another Islamic terrorist attack will happen. That is as certain as the rising sun, if rather less predictable and regular in its schedule.

HuffPo shows us violinists playing in the streets, sad songs dedicated to the memory of victims neither the player or the crowd knew or cared one whit about yesterday. People hold each other, crying their crocodile tears, because a journalist is nearby, his camera there to chronicle the sadness, the hope, the solidarity and peace-love-understanding of the virtue signalers.

Look at me, says the subject of the camera, I’m sad because I’m supposed to be, because the TV told me to be sad, and come here, and hold candles.

Of course, the talking heads of the media Establishment are there to tell us that the terrorists did not represent Islam, that Islam is a religion of love-peace-understanding, and that the massive influx of Islamic refugees, of course, has nothing to do with anything. All of us mean-people-racists are, of course, ignored as the Right-wing bigots we are tarred as. So nothing changes. Refugees will pile into Europe, America will refuse to secure its own borders, and Progressives will hold their candles, crying because somebody told them that was the right thing to do.

Orwell told us of the Two-Minutes Hate. Today we have a new variation: Two-Minutes Love. It’s supposed to make all the bad boogeymen go away, banished by the power of solidarity, hashtags, and heart symbols written in chalk.

Progressives are, in simple terms, believers in magic. Magical chalk dust will banish Islamic terror from their shores. Chants and candles will extinguish 1,500 years of conflict. Virtue signalling will effectively replace soldiers, bombs, and bullets as the chief defenders of Western civilization. Except that they don’t even believe in that anymore. At some level, Progressives believe the West deserves exactly what it’s getting. If only, says the Progressive, the anti-Islamic bigots weren’t around, this wouldn’t happen anymore.

One Turkish fellow I debated declared that the attacks were revenge for actions of Western countries in the Middle East. I suppose he meant the Iraq war, or perhaps the war in the Afghanistan. In any event, he wasn’t clear. I countered by pointing out that the Persian and Byzantine Empires didn’t do anything to the Muslims (indeed, the Byzantines may have actually sheltered them for a time). Yet the Muslims attacked and subjugated all of one, and most of the other.

Our intrepid Turkish gentleman explained that it was “a long time ago.” Sure it was. But the modern media still has a rage boner for the Crusades, so why not go back that far? There is an easier explanation for all of this, one that doesn’t require cherry-picking from history or religious texts: we can believe ISIS and other Islamic terror groups when they say they want to kill the infidel, or make him pay the jizya, take his women, and establish a global Caliphate.

Will lighting the Eiffel Tower in solidarity with Belgium accomplish anything effective against that sort of thing?

But doing nothing and pretending to be important is the hallmark of Progressivism. After all, magic chalk dust will solve everything, right? And war, as they say, never solved anything at all, right? Justin Trudeau explains this ass-backwards thinking for us: 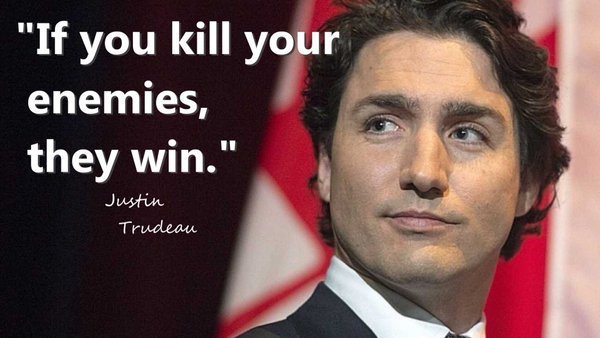 Progressive thinking in a nutshell.

The corollary to this in Progressive parlance would be that if you hug random people in the streets in front of a television camera, you win. It doesn’t matter if the hugger, or the huggee, was in any way tied to the attack. Nobody on the nightly news needs to have lost anyone, or been affected in any way whatsoever. All that matters is if you stand in “solidarity” and chant the right words.

One particular graphic making the rounds on Instagram tells us that Belgians need to “be strong” in the face of the attacks. 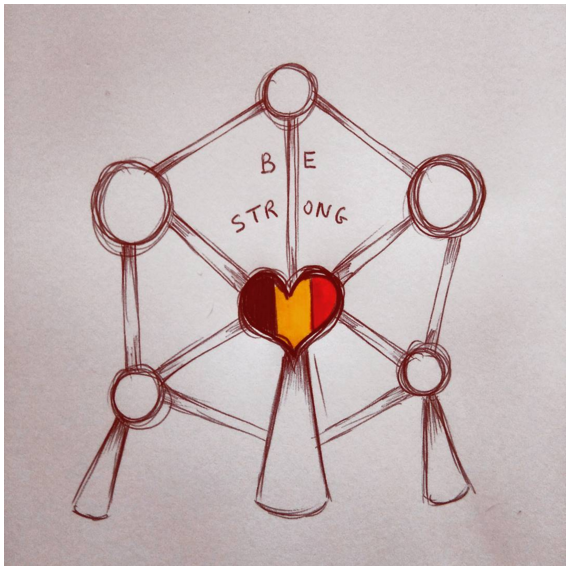 Being strong might mean killing your enemies. But not for these people. For them it means crying, and hugging, and posing for pictures.

Progressives wouldn’t know strength even if it blew up in their faces. Which, of course, it actually did in this particular instance. Say what you will about Islamic terrorism, but its practitioners have more strength than its victims.

HuffPo tells us that all this activity on the part of Progressives is how to properly “fight back” against your enemies. If Hitler were alive today, and invading Europe, his panzer divisions would be met not with inept British and French forces, but with crowds holding signs denouncing bigotry, and the trifecta of racism-sexism-homophobia. Dive bombers would fly above crying Progressives standing in solidarity with the dead bodies surrounding them.

They would continue to chant their magical chants, draw their childish “art” on the streets in chalk, seeking to banish the demon Hitlerites back to the nether-realm from whence they came. “It’s time to fight back,” HuffPo would tell us, “mobilize the divisions of the gender-confused otherkin, the purple-haired manhaters, the effeminate men unable to even conceive of holding a weapon in defense of their own lives.”

And then when the Hitlerites conquered the Earth, the remains of the Progressive movement would gather in the ruined, bombed-out town square and hold their candles to mourn the dead, still hoping their magic would work, like the Native American Ghost Dance movement. Dance in the center as the armed Cavalry surrounds you, and chant until the White Man disappears forever. After all, it worked well for the Native Americans, right?

Just replace Hitler with Islamic terror above, and you’ll understand what’s really going on here. And just as the Ghost Dance failed to reverse the conquest of North America by European colonists, so will the Magical Vigils of the Progressives fail to slow the tide of Islamic conquest in Europe. To quote one of the few TV shows I’ve enjoyed in the last decade or so: “all of this has happened before, and all of this will happen again.”