Impeachment – Schiff-for-Brains is calling Trump GUILTY, before hearing the evidence of BOTH sides.

Say, isn’t that what might be called bias? Not a good thing BEFORE the evidence is in. Well, unless you’re a Leftist.

Then, of Republican Nixon (BEFORE the Impeachment hearings had concluded).

And, now – after time and maturity had kicked in. 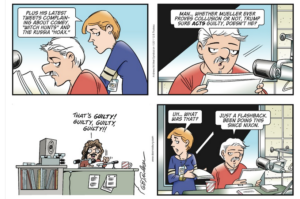 Corruption – “There is nothing new under the sun”, as the Bible has it (I’m linking to multiple translations – pick your fav).

I haven’t bought the new Peter Schweitzer book, Profiles in Corruption: Abuse of Power by America’s Progressive Elite, yet. I was hoping to find it in the public libraries.

Ohhhh. I’m out of breath – laughing when you have a cold really takes it out of you.

I kid, I kid. When I finish this post, I’m buying it. Hate to part with that much money ($14.99 for the Kindle edition), but, I need something to read while the Senate Democrats and RINOs beclown themselves in the Impeachment farce.

Celebrities – OMZ, Taylor Swift (that erudite and highly educated political philosopher) has written a new song that will galvanize the teen masses to revolution against their “sinister” GOP overlords!

We need to give up now.

If Yet Another Aging Celebrity Poseur (YAACP) has come out against Trump, his supporters, and all that he has accomplished, there’s no alternative we have, but to surrender.

Other – our family has lost another member – my sister-in-law’s brother, at way too young. My husband will be traveling for the funeral; I will not – both recovering from an injury, and coming down with a cold. As well as two business-related events that I can’t miss.