If you use Twitter with any frequency, you are probably already aware of the special sort of stupidity emitted by the Blue Checkmarks, that is people who are verified by Twitter. Since Twitter has a habit of banning Rightists, either directly or through shadowbanning, the number of verified Conservatives is rather smallish. It is non-zero, of course, but it could be said that Twitter wishes there were none. Thus Blue Checkmarks are usually liberals, and a large percentage of them fall into the category of Shitlibs, the special breed of liberals prone to the most idiotic and useless drivel imaginable. 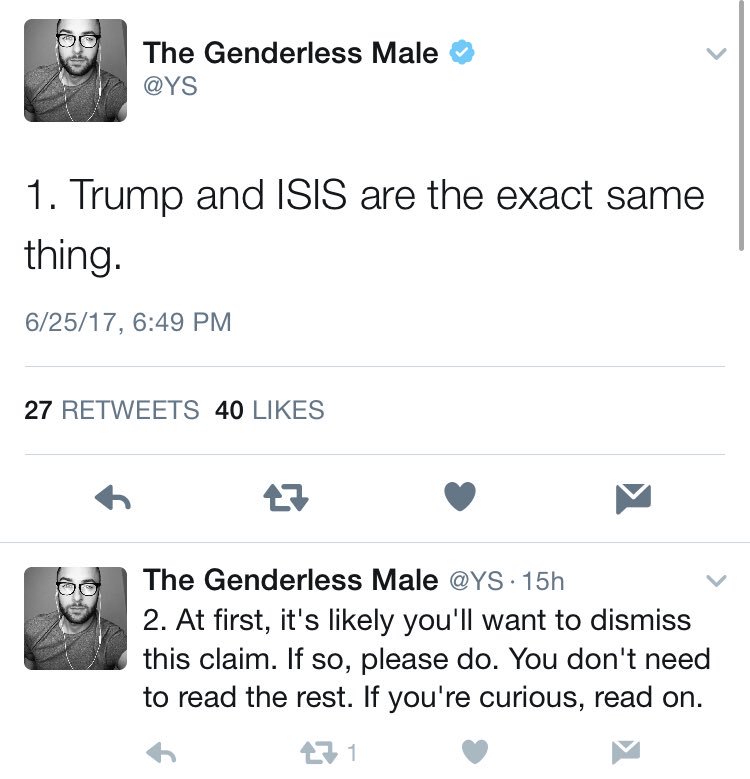 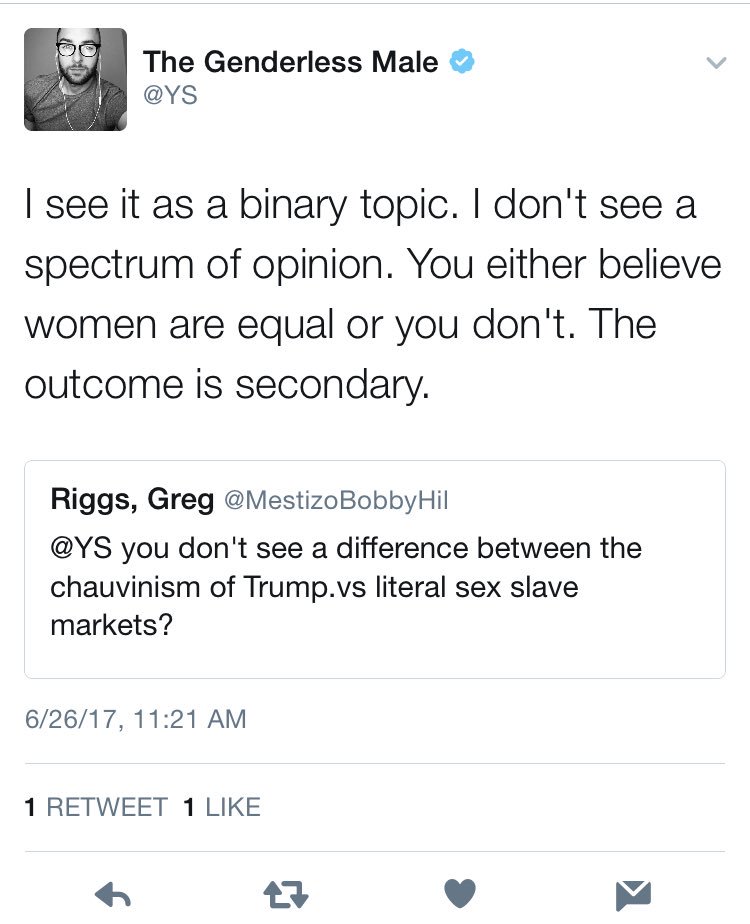 The Blue Checkmarks Strike Again. This appalling level of deceitful filth equates Donald Trump joking about “grabbing ’em by the pussy” with literal sex slavery and mass murder committed by ISIS. This is the mindset of the far Left, any deviation from their narrative is deemed literally Hitler. Or in this case, literally ISIS. As this “genderless male” puts it, it is binary. If you are not with him, you are evil. And as evil, you must be destroyed.

Now, some might say that an out exists. What if the person disagreeing with the narrative is merely stupid? Ah, well Blue Checkmark Twitter has an answer for that, too:

So, stupid and evil are the same. They are both evil. Crass sexual humor is the same as sex slavery and mass murder. Words are literal violence. But violence conducted against Rightists isn’t violence at all. These people play very fast and loose with their language. It is language pollution of the highest order. Words mean whatever these cretins want them to mean. And, of course, what they want words to mean is “kill Righty” or maybe it’s “kill Whitey.” Whatever. In their world, it’s probably both.

Here’s a great example of that: 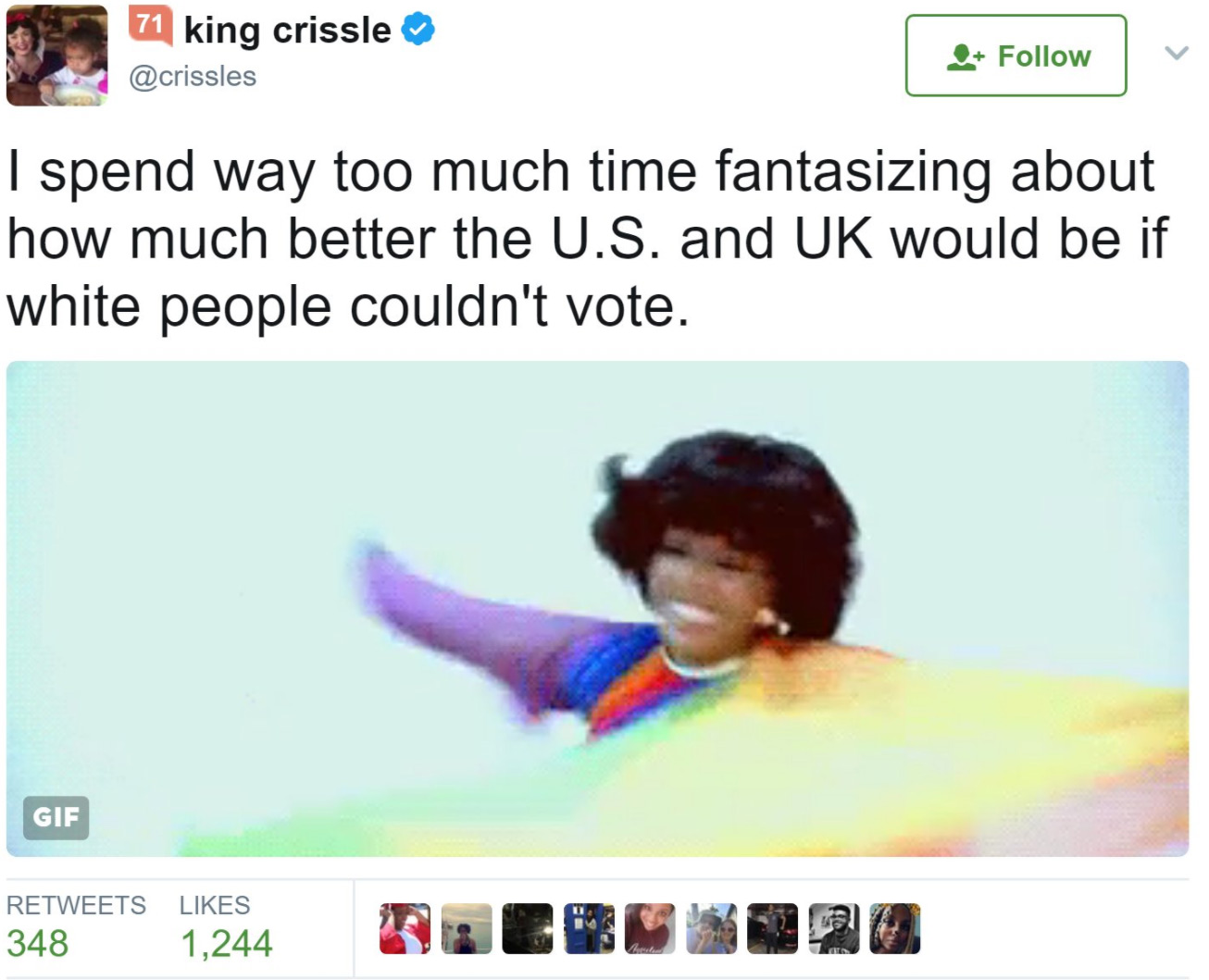 Of course, the casual reader might say that I’m cherry picking these. And sure, I’ve picked a few whoppers for the amusement of my readers. But you can browse for yourself, and see the idiocy and hateful language spewed by Blue Checkmark Twitter.  Many of these people have jobs in entertainment, media, and academia. And most of them despise you. For every Sean Hannity with a Blue Checkmark, you’ll find a dozen of these cretins. And as we saw with Milo Yiannopoulos, Twitter loves to remove the checkmark, or simply ban a Rightist, if they believe they can get away with it.

This Tweet appears to have been removed, but the Blue Checkmark who tweeted it is still around:

If this were during the days of the Obama administration, and a Rightist posted something like that, he would have been booted off the island with a great deal of media fanfare. This goes right under the radar.

But don’t take my word for it. Browse Blue Checkmark Twitter for yourself. You will never find a greater hive of scum and villainy.