Bigotry is the ultimate sin in modern American Leftism. Racism and sexism are the most commonly cited varieties, of course, but other permutations exist. Homophobia, Islamophobia, fatphobia, ageism, and presumably a whole host of other possible violations.

The fact that it is accounted as the ultimate sin provides the Leftist with a moral club with which to browbeat his opponents. If one accepts the proposition that these are the worst sins of humanity, and one also accepts the proposition that all humans are biased (which is true – humans categorically cannot be fully objective), then everyone is guilty of the ultimate sin. Weaponized empathy is then applied. You are guilty, look at all the horrible things that happened in the world, which are now your fault because you’re guilty of the ultimate sin.

Redemption is only possible through the application of Progressive policies. Give up your wealth, give up your possessions. Surrender your country, vote the way the Progressive technocracy wants. And even then, the intercession through political submission is only temporary. Tomorrow you will still be a racist, and more will be required of you.

Take this Leftist example on Twitter. Admittedly, he is not exactly the brightest bulb even in the ordinarily dim Progressive world. But he does a nice job of illustrating this view of the Ultimate Sin ™. 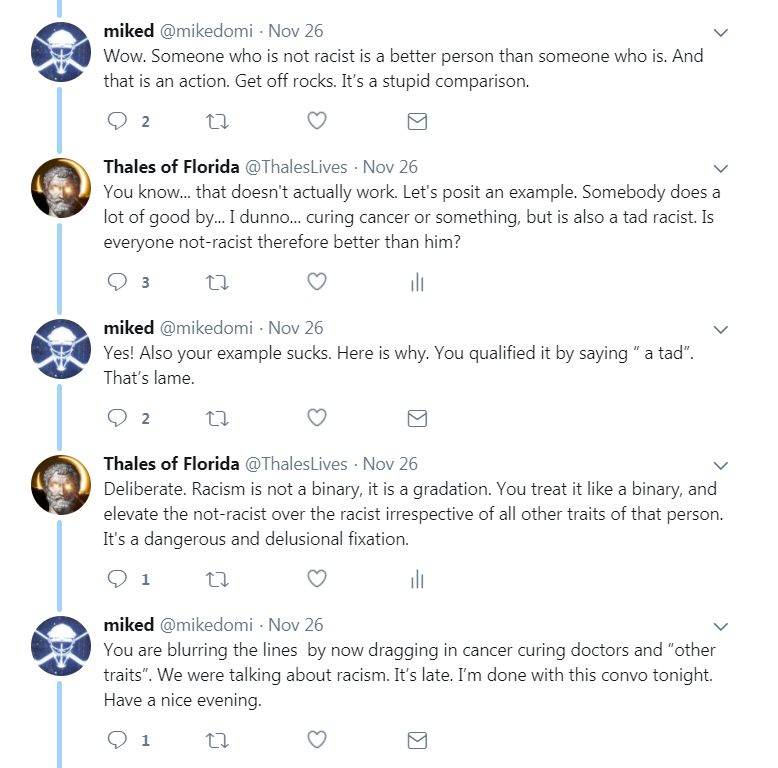 Read it very carefully. “Someone who is not racist is a better person than someone who is.” And then our intrepid Leftist attempts to escape by taking issue with my application of “a tad.” The application, of course, was very deliberate, as was my example. We’ve already had plenty of real life examples of highly intelligent, useful, inventive people being tarred and feathered because they were deemed guilty of the Ultimate Sin ™. Remember the case of Brendan Eich? Remember Tim Hunt? So a man can do something, accomplish something great, but everything is rendered null and void with even a minor violation of the Progressive narrative. You could cure cancer, but if you made a joke about “chinks” you’re now accounted as lower than every person Progressives see as not-racist.

Let me rephrase that a bit. The person Progressives deem as not-bigoted (and this is a temporary license which can be revoked at any time) is automatically a better person than some of the brightest, most accomplished people in history.

Worse, bigotry is seen as a binary state with them. You are either bigoted, or you are not. Gradations are meaningless. The man who makes a politically incorrect joke about “wetbacks” is as evil as Hitler, because both are “bigots.” This is one of the convenient tools of Antifas who see Nazis in their breakfast cereal, all Ultimate Sinners are bigots, all bigots are Fascists, all Fascists are Nazi, all Nazis are Literally Hitler. They misunderstand why Hitler was evil. He wasn’t evil because he didn’t like Jews, he was evil because he killed them by the millions. It is the physical action not the thought which rendered him evil.

Progressives lump both into the same category and call it all bigotry, but one of these is not like the other. If you have a bad thought you must feel guilty for the thought. If the badthink turns into speech, you are a Nazi, because speech is synonymous with physical action (except when they are talking, in which case it isn’t). They are like Neo in The Matrix, dodging sense and consistent definition like the protagonist dodged bullets.

Everybody has inappropriate thoughts of some kind or another. The sensible person dismisses them and does not allow them to unduly affect his life. He need not feel guilty about them. He merely needs to not act on them. Do not allow weaponized empathy to hijack your brain and make you feel guilty for bad thoughts (some of which aren’t even bad in any objective sense – they are just un-PC). Do not fall into the trap of bigotry as the Ultimate Sin ™. And certainly there is no need to submit to Progressives so that they may conduct intercession for you or grant you a temporary, revocable license as a non-bigot.

Consider the extreme endpoint of the Progressive train of thought. An equal-opportunity murderer is better than the man who cures cancer but makes a politically incorrect racial joke. The Marxist roots of this line of thinking should be evident by now. It’s the same strain of ideological madness that led to Communist regimes prioritizing political criminals over violent ones. Fidel Castro released many murderers and employed them as guards and executioners for political prisoners. After all, the murderer is better than the political opposition.

Progressives think this is getting to the root of the problem; that by attacking the thought, the bias, they are somehow curbing the action. Except that this doesn’t work. Controlling thought at this level is impossible short of deliberate brainwashing; short of making everyone functionally identical drones. The proper way of heading off bad behavior is to not act on something inappropriate. When a man gets mad at someone over something small, he may think about beating the stuffing out of that person. But should he act on the thought, or dismiss it and calm himself down?

This is part of simple human maturity. The Progressive must treat humans as children, incapable of walling off thought and action; that each thought must turn into corresponding action, so one must be constantly on the lookout for biases, wrongthink, or otherwise. Some of the smarter ones attempt to escape this trap by (truthfully) admitting that this isn’t actually possible. But then they turn around and say we must now compensate for these implicit biases; for these thoughts. They believe that the thoughts must somehow be turning into unconscious actions that are small and immeasurable as single units, but still causing a collective effect. Since clearly [insert demographic group here] are worse off than another, the Progressive might say,  we must compensate for the difference, because the cause of the difference must be collective wrongthink; collective bias against [demographic group].

There is an unfounded assumption baked into that: namely, that such small, unconscious actions are the primary cause of such inequity. Many other explanations exist. With the famous “77 cents on the dollar” comparison with women, different personal career and life choices probably play a role. With regards to black people, Thomas Sowell points to the welfare state as the primary cause. He has explained that by subsidizing the destruction of the black family, the black middle class has been wiped out, and this, accordingly to him, has resulted in the inequity. Some suggest nutrition and dietary choices play a role; that people who eat like crap don’t develop as well. Others suggest general biological differences as another possibility (and not merely racial – but also sexual). Progressive brains explode into rage at the mere hint of this notion. It is considered beyond the pale to discuss. Cultural differences are also often cited, with the famous Asian stereotype being a common example (“you study to be doctor NOW!”).

Point is, whatever the reason(s), the Progressive assumption is that it must be the fault of wrongthinking bigots, and we must transfer their ill-gotten, bigoted gains to the poor, oppressed people of… whatever. Naturally, as intercessors on your behalf (and they get their cut, accordingly), you must submit to their will, or your non-bigot license will be revoked and you will be considered worse than literal murderers.

Because bigotry, you see, is the Ultimate Sin ™.

Leave a Reply to Progressives are Cancer Cancel reply