Appearances vs. Substance or Admitting That You Don’t Know

I’ve been blessed in one respect, whether by God, blind luck, or some kind of subconscious effort I’m just not aware of. Despite my usual anti-Progressive vitriol, the vulgarities, the rants, and the endless prattling about topics most people find mundane, I actually get along with people.

Surprising, isn’t it? Or, maybe my readers already figured it out and I’m just the last one to get the memo.

While I am acquainted with Dale Carnegie’s tome of ancient wisdom, How to Win Friends and Influence People, that is not the source. Carnegie explained that we ought to shut up and listen more often, and whatever my positive traits may be, keeping my mouth shut has never been a talent of mine.

But one piece of life advice has stuck with me: it’s okay to say “I don’t know.”

Perhaps it sounds cliche, like some pithy quote slapped onto a black background, with some dead guy’s face attached to it in low, pixelated resolution. But it’s huge, and it’s shocking to note how many people just cannot bring themselves to admit this.

If your experience growing up was anything like mine, you were probably made aware of your relatively high intelligence from an early age. Indeed, elementary teachers fussed endlessly over my high test scores. There was talk of putting me in some kind of gifted program. Though, personally, I was more convinced that my teachers were morons. Still, I knew I was smarter than the average bear, so to speak, and so the temptation to avoid saying “I don’t know” was huge.

When you have smoke blown up your ass for twelve years about how awesomely super-smart you are, it’s hard to shake that. So I was invested in this notion that I was superior. Saying “I don’t know” became an admission of weakness. Or at least so I thought.

Things changed when I graduated. Being the most intelligent kid in a school of, at most, 1,000 kids was no great achievement in the grand scheme of things. Once doing development work as an adult, I was thrust into an environment where everybody was smart and I was categorically not the smartest person in the room.

When you feed a line of bullshit to a moron, maybe they buy it, maybe they don’t, but they usually remain in awe of you at some level. When you feed that same bullshit to an experienced, intelligent man with an IQ that puts yours to shame, you engender disgust and disappointment. Not knowing a thing is forgivable, for it is something you can easily rectify. Lying about it, on the other hand, is evidence of a serious character flaw, a deficiency which takes great time and effort to expunge, if it can be rectified at all.

Eventually I had this nonsense beaten out of my skull sufficiently. Today, if I am unsure of something, I will say so. If I do not know the answer to your question, I will tell you. This is true even in the midst of furious intellectual debate. Nobody has all the answers, and it is better to say that you do not know than to make a fool of yourself.

I realized today when conversing with one of those rare Leftists who retains fundamental intellectual honesty (I actually like this guy — he’s not an SJW), that this is the yardstick I use for people. Disagree with me all you like, and you will not trouble me. At worst, I may get bored with you and take my debates elsewhere. At best, you may challenge me and convince me of the rightness of your position. Either way, decent conversation hurts nobody.

SJWs have frequently accused me of having a closed mind. They endlessly repeat “educate! educate! educate!” But they use every dirty trick in the book, from personal attacks to outright lies (you racist, you!) to avoid even considering my point of view. I’m sitting here, trying to think if I have ever heard the words “I don’t know” sincerely spoken or written by an SJW. Certainly, nothing comes to mind. If you have a counter example, please send it to me, I’d be fascinated if this actually happened at some point.

Admitting that you don’t know something is seen as weakness by them, because SJWs are endlessly fussing over their reputation, over how they appear to others. Virtue signalling can be regarded as mobilization of their forces, for if you do not come when summoned to a cause, it reflects on you. Whether or not a person is racist doesn’t matter. All that matters is whether or not that person appears racist. And, concordantly, it doesn’t matter whether or not you are actually intelligent, only that you appear so.

The admission of ignorance or error works against that.

Similarly, they will tar you in the same manner. Nobody has to prove that you are some kind of sexist woman-hater. They must only make it appear that you are.

Go one step further. Zoe Quinn called herself a game developer, Anita Sarkeesian billed herself as an expert on games. Yet Zoe’s development credentials were essentially limited to writing an outline document. And Anita was on record as having disliked video games before she decided to call herself an expert in them. It didn’t matter if Zoe was actually a game developer, it only mattered that she appeared as one.

Worse, one doesn’t need to be a victim of harassment with them, it only matters that she appear as a victim. Here’s Brianna Wu, “harassing” herself: 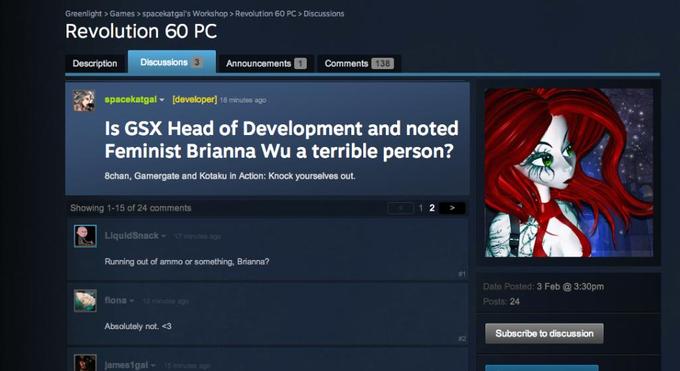 An oldie, but a goodie.

Everything is expressly political with them. It is a sort of low-grade form of warfare, a constant jockeying for position using every dirty political trick imaginable behind the scenes. They will harass themselves if it should prove helpful to their appearance, or even thank themselves: 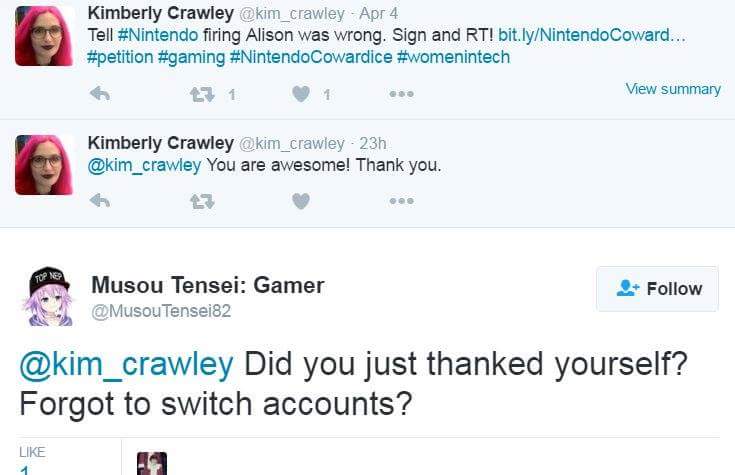 When SJWs self-destruct (see what’s happening at Gawker right now as a great example), it is often rapid, shocking, and brutal. They come apart so rapidly. Where before they appeared, at least to the public and the media, as shining beacons of peace-love-understanding, they are soon revealed as utterly atrocious human beings. Sarah Nyberg was outed as an incestual pedophile. Zoe Quinn spread her legs to several men to build her “game developer” credentials in the media. They’ve been caught bilking money, lying, stealing from their followers and then failing to deliver their products (Anita, how many videos have you created for your hundreds of thousands of dollars?).

There is no substance underneath the appearance, nothing to bolster them up when things start to go badly for them. They cannot stomach people disagreeing with them because that might expose them for the shallow, unintelligent, unoriginal liars they are. They cannot allow honest debate, because they have no honesty. Nothing can be permitted to make them feel bad, because they have no reservoir of self-esteem, of honest self-assessment, to sustain them if the endless parade of positive feedback halts even for a moment.

Lies are intrinsically shallow. They are always somehow less than the truth, at some level.

And so, circling back to the original point, when someone tells me in a debate that they don’t know, or that they have made a mistake on some point, I respect them more, not less. I see this as evidence of honesty, and of the ability to discuss with me the substance of a matter, rather than focusing on appearances. And so when others challenge me on something I’ve said, it doesn’t feel like an attack on me, or my reputation.

Rather, it feels like two human beings having a conversation. And, unsurprisingly, we don’t agree on everything. Whodathunk, right? Hell, I might even be wrong. Or, just maybe, like most things in the universe, I just don’t know.

So if you ever find yourself unsure of something, just admit it, shrug your shoulders, and move on. And always be aware that even if you are the smartest person in one room, you might be the biggest idiot in the next one. Life is funny that way, sometimes.