The election of Donald Trump brought light upon a phenomenon that has been growing for as long as I’ve been alive. Americans are split, and the rift between them continues to widen. With Trump, however, it has become impossible to hide this fact.

During the Bush years, we still pretended that Liberals and Conservatives shared similar values. Sure, they disagreed on many issues, but both loved America and wanted to see it prosper. But even then, Bush Derangement Syndrome was a thing, and protesters carted “Bush = Hitler” signs everywhere. The Left was beginning to regard the Right not as a friend who happened to disagree on some things, but as an enemy to be defeated, subjugated, or even killed.

After all, if you seriously refer to someone as a Nazi, and paint them as such, then you are countenancing violence against them. We see this phenomenon growing with this “punch Nazis” rhetoric flooding social media. Only the term Nazi is left deliberately vague, subject to whatever definition the Left wants to give it. Shaving your head can make you a Nazi, for example. So is it permissible to punch people who have shaved heads? 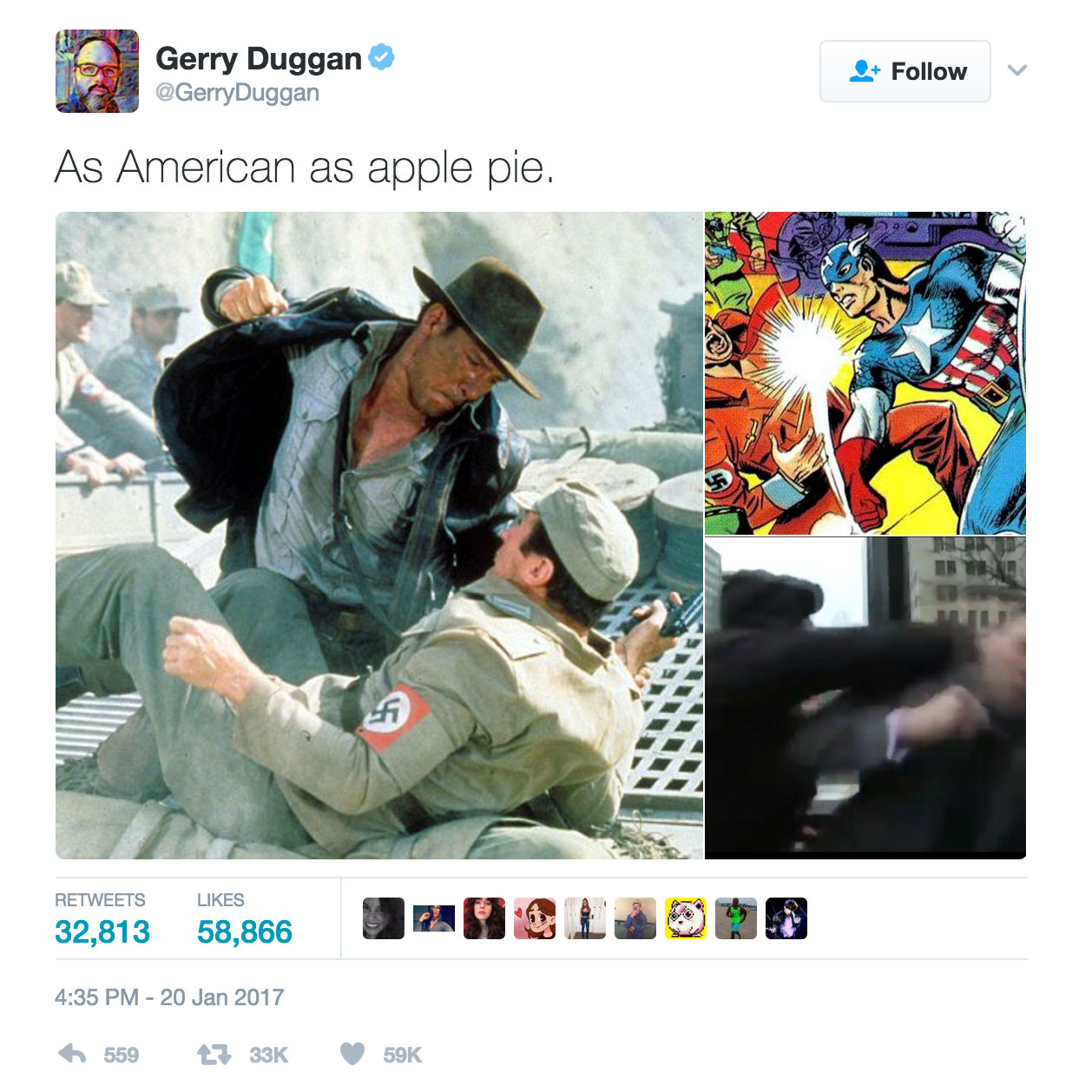 If you refer to a President as Adolf Hitler, you are tacitly saying it is okay to attack the person. And certainly the many threats issued publicly against Donald Trump provide evidence of this. Does anyone believe that such threats would have been permitted against Barack Obama? Madonna got up on stage, in front of hundreds of thousands of protesters, with some of the protests going violent already, and said she wanted to blow up the White House.

That is beyond the pale. She should be in jail for this, and if you and I, dear reader, had done such a thing, we would be in jail. That was a palpable, credible threat.

But Madonna aside, you can see how this is deemed okay, because the Left thinks the Right are Nazis. Remember Tad Williams telling us that Republicans were all Nazis? Put two and two together here.

However, we’ve one good thing going for us. Some among the Left would kills us all if they thought they could get away with it. But they can’t. The military is mostly staffed by our people, except for some of the brass. The armed civilians are, again, mostly us. Even a good share of the police is us.

If we really were Nazis, there would be none of them left alive. They’d have been exterminated decades ago. Joseph McCarthy would have been canonized by now.

But if they want to go with this superficial argument, wherein anything they don’t like is literally Hitler, let’s play.

Who looks more like a bunch of brownshirt Nazis? Antifa or the Tea Party? 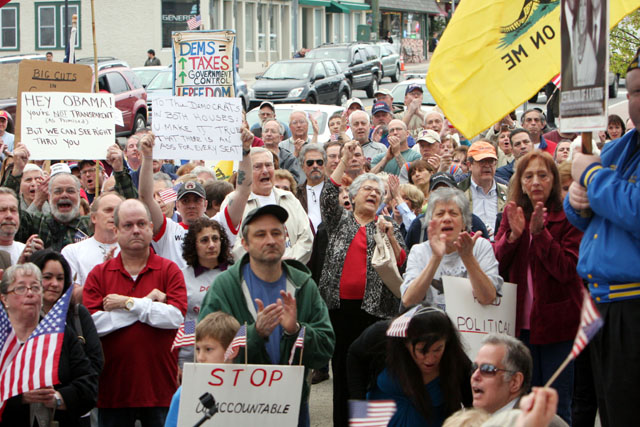 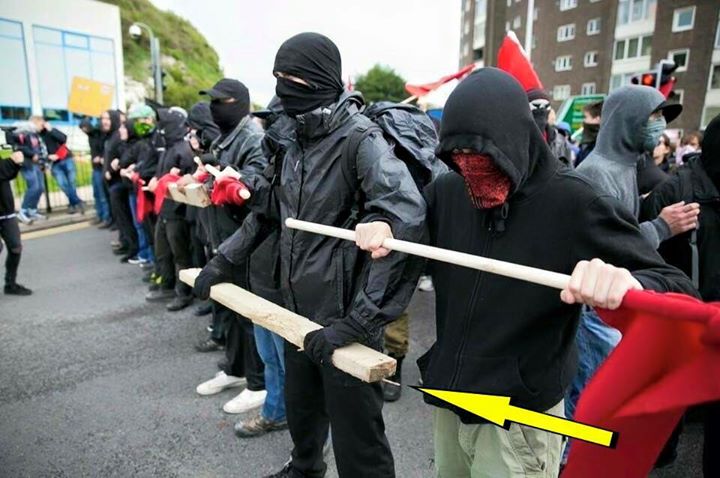 Imagine that you knew nothing about the political situation. Which crowd would… concern you more? The one dressed in black, with their faces covered, holding various weapons in threatening poses… or a bunch of old people holding up signs?

Tom Kratman describes in detail the steps that will probably have to be taken, sooner or later (probably sooner) to deal with the rise in violent rioting. It’s not pretty. But take note specifically one of the items he advises:

Special Tip #4: Drive finishing nails into the ends of your batons and snip them off to leave about an inch sticking out. No need to sharpen the part sticking out; it’s sharp enough to penetrate and leave a painful puncture wound, whether directed at arms or torsos or thighs or groins (ouch!).

Now, you might say this sounds pretty harsh, but look at the picture of the Antifa thugs above, and note the arrow pointing to the 2×4. The rioters are already doing this.

They have rationalized violence against you. Prepare yourself accordingly.

And even on the more peaceful side of things, I’ve found it difficult to communicate with Leftists anymore. Some time ago, I was visiting some very old friends, a few of whom were liberal, and I realized that there is almost no common ground anymore. One friend explained in detail that healthcare, food, shelter, energy, transportation, and a host of other such things were basic human rights, and these things should be guaranteed freely to every human being on the planet, regardless of cost. Not providing them to every human on Earth, he explained, was immoral. Thus regardless of any success Capitalism might have, it was fundamentally evil.

Only Marxism enshrined these as human rights. Only Marxism was moral. How could anyone be so immoral as to not see these things as fundamental? And this was a liberal who regarded himself as relatively moderate. He trumpeted his willingness to compromise with Conservatives by saying that he was okay with some guns. Single shot black powder muskets, he said, were okay with him. He regarded this as a great concession on his part. Similarly, he explained, he didn’t mind some Capitalism as long as it was for non-essentials. Video games were okay to be treated as Capitalist products, so long as they didn’t contain hate speech violations.

That’s what passes for a self-described moderate Democrat, these days.

I didn’t even bother arguing with him. There was no point. Where do you go from that? The difference was so fundamental, so basic, that there was no middle ground, no place where compromise could happen.

And so the divide grows even in the non-violent space.

I wondered in that moment, if this friend of mine would kill me, should the revolution ever come, and should I stand in the way of it coming to pass. Perhaps he would. Maybe there would be regret, a sense that it was a shame I couldn’t be made to understand the need for Marxism… Or perhaps, as the old cliche goes, he’d say “I can’t kill my friend,” and then assign someone else the task of getting rid of me.

It was a chilling thought. I didn’t tell him my views. I didn’t want to deal with the resulting emotional storm I could sense waiting for me if I did. I’m down to a very small handful of liberal friends who truly know my views. And it is they who have broken the friendship with me, and not vice versa. I was willing to be tolerant of their views. They were not willing to extend tolerance to mine.

And so even friends have drifted apart over the years. Trump’s election has split families, and friendships, and split America down along fault lines that have existed for a long time, but which we pretended didn’t exist.

I even know a great many who are Conservative and couldn’t vote for Trump for various reasons, who are nonetheless cast out from family and friendships because they didn’t denounce Trump adequately and they were, in any event, still Republicans.

I don’t know what it’s like to regard half the country, and indeed your own relatives, as the epitome of all evil, as the pinnacle of human depravity, as an eternal boogeyman under the bed. But it has happened.

I’ve long said that I really don’t want the future to go down the path I’ve been seeing. If anything, I’ve been in denial about it. A commenter here, Michael Maiorana, explained to me that I knew very well the implications of what I was saying — and he’s right. I do know them. But they are harsh truths, and they are extremely unpleasant, and I must ask your pardon that I don’t like facing them.

If this divide doesn’t stop widening very soon, then we all know where this is headed.

So keep your ammo dry, folks.