It’s the latest thing. It’s another sponsored hashtag pushed by social media platforms, elegantly scripted and carefully nurtured by celebs and stars. I’m sure we’ll see a TV commercial soon, just like that 84 Lumber ad during the Super Bowl.

Except these people are grasping at straws. They act like this is about legal immigration, but the Wall was never meant to have any effect whatsover on that. Legal immigration reform may be needed, and may be addressed in the future.

But that’s not why these people are blowing up Twitter with this stupid hashtag.

It’s all about undocumented immigrants, as they say. Or, more correctly illegal aliens.

Mexico is big enough for this woman and her family, too. Deport immediately. One reader who goes by the name of “Skywalker” had this to say:

I can’t believe we’ve actually gotten to the point where people have to defend the merits of immigration laws/policy (and the immigrant advocacy groups calling them “undocumented” rather than illegal is a none too subtle action to further that agenda).

Rather than treat it like the crime it is–which is not exactly a “victimless” crime as it steals vast amounts of public taxpayer resources–public and often federally funded institutions are standing up for these groups, forming support alliances like a “Dreamer Resource Center”:

To that truth I could only add the following:

I’m to the point where Lefties just give me a headache with their excessive moralizing. They believe that America’s chief calling is to give up everything, including the very country itself, as a sort of international charity service. Every time a man has a shitty day, or something goes badly in his home country, he is to be given an inalienable human right to immigrate to America, legally or illegally. It’s stupid.

Immigration should be considered on one basis, and one basis only: how it benefits the United States of America. If an immigrant obeys our laws, and applies legally, we may consider his application, and judge whether or not we believe America would gain from his presence, whether our country would be improved by his admission.

If he does not obey our laws, and tries to sneak in, he has shown contempt for us, and should not be admitted. If he obeys the law, and applies legally, but we see him as a terror risk, or a welfare risk, or we don’t think he’ll assimilate, or a thousand other such reasons… too bad, too sad. We are not the world’s charity service. 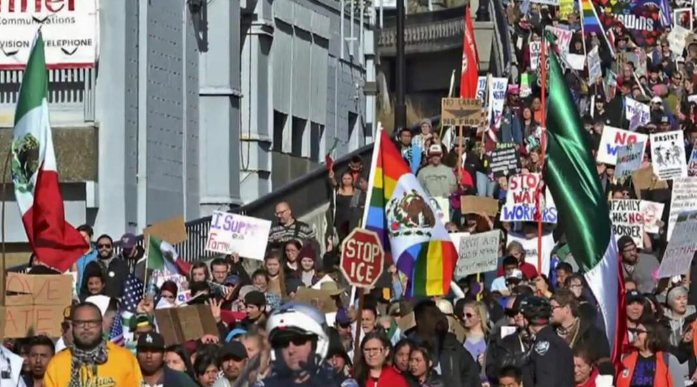 If you want to become American, you might want to fly American flags, not Mexican flags.

This is Weaponized Empathy again, folks. Everybody who wants to come to America has a sob story. Many of them are even true. After all, nobody leaves their home country because they love the place, and things were just great there.

We’re not a charity service. We get to choose. If we want great people like my friends Nicki Kenyon and Sarah Hoyt, that is wonderful. That is a fine thing. I am proud and honored to have them as fellow citizens.

But where do these people get off saying “my life sucks, so I should just be able to walk across the border, no questions asked, right?”

Immigration is not charity. It’s a category error to consider it as such. And I’ve absolutely had it with idiots who claim it ought to be. Build the Wall, secure the border, deport illegals immediately.