I have another post brewing later today… but for now, read this epic Twitter rant from Ace of Spades:

The thing that is most worrisome and poignant here is a reply someone posted with an archived screenshot from 2014. Observe: 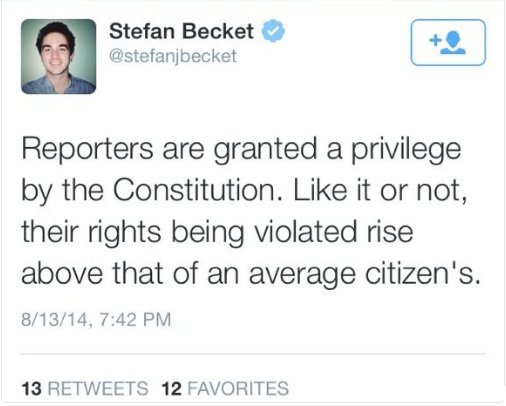 This reads exactly like Orwell’s Animal Farm. All animals are equal, but some animals are more equal than others. This man considered the media to be more important, and more protected by the Constitution than actual citizens. I presume he refers to the first amendment.

Congress shall make no law respecting an establishment of religion, or prohibiting the free exercise thereof; or abridging the freedom of speech, or of the press; or the right of the people peaceably to assemble, and to petition the Government for a redress of grievances.

But the media and the elitists running things really believe they are more equal than you, that their rights take precedence, even supposing they deign to grant us any rights whatsoever.

Wake up, people. We’re coming up on the fucking end. I don’t know that electing Donald Trump will prevent Civil War. It may be too late to stop that. But I know, with as much certainty as any human being can claim, that Hillary Clinton means war.

I will reiterate and repeat: Hillary Clinton means WAR.

A vote for Hillary Clinton is a vote for Civil War. No exaggeration, no rhetoric, no bullshit. Just truth. Because as Ace of Spades told us in one of those tweets:

“People are sick of being bullied.” — a simple but very astute observation on why people are in near-open rebellion

Consider what happens when Hillary bullies them more for eight years. Near-open rebellion will lose any vestige of peacefulness, because the vote will have been deemed worthless to effecting change. Look at Brexit, denied by the high courts in Britain, despite a very clear referendum. Tom Kratman has told us in the comments in his column at EveryJoe, that the vote is a stand-in for violence. It is an agreement to solve our differences peacefully, and compromise together.

When we are not allowed to use the vote, when the results are thrown out whenever the elite takes issue with them, when blatant corruption and media manipulation as shown in the Wikileaks emails are employed to destroy our voting power… all you leave us with is violence.

And mark my fucking words. Violence will come.