A “Shooter” at OSU, Little Green Fuckheads, and Other Assorted Prog Idiocy from Today

Yeah, the title is long. The post will be mercifully short.

So here’s a sampling of Progressive stupidity in no particular order. First, in Canada, a female MP from Alberta takes issue with the loss of jobs in her province, and delivers a speech that contains the word “fart” in it. Another MP, with the sort of pompous, perpetually-offended scowl reminiscent of every Gender Studies professor you’ve ever seen then declares how offended she is. The SJW cannot even bring herself to say the word “fart” and must, instead, spell it out to protect her delicate sensibilities. Take a look for yourself:

All I can say is, thank God I am not a Canadian MP. My language would trigger Miss Cat Lady into conniption fits.

For our second display of Progressive idiocy on this Monday, November 28th, I present the following: Charles Johnson of Little Green Footballs, a blog that, many moons ago, once made a lot more sense than it does today. Ole CJ used to be something of a center-right kind of guy, until he had an epic meltdown that resulted in the banning of something like 75% of his readership (including yours truly).

Today, he takes offense with people saying mean things about Castro. I, naturally, had feelings about this which resulted in my immediate blocking: 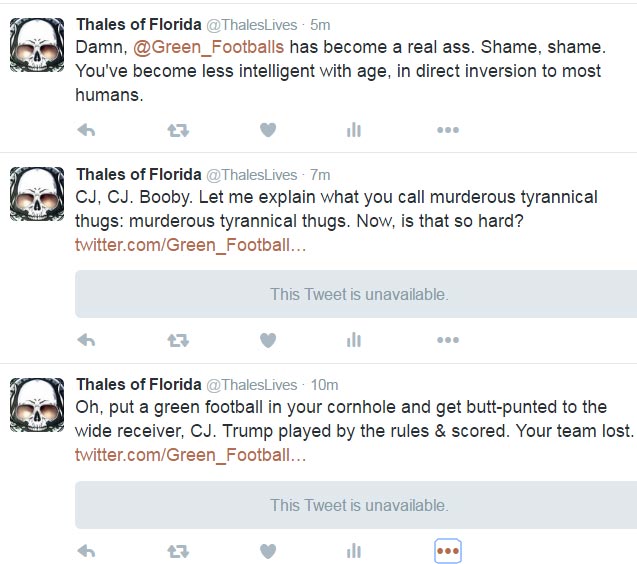 Feel free to go to his Twitter to see the originals – blocked from my feed. He was taking offense that Trump said “assholish” things about Castro. He was also hurt that Hillary lost.

But today’s winner in the contest of who can be the biggest Progressive idiot goes to whoever was responsible for this headline:

The problem? Machete-wielding guy had no gun. He tried to run people over, and resorted to the machete after crashing his Honda 4-banger. The gun graboids were practically drooling… and were resoundingly disappointed by the result. Also, said terrorist turned out to be a Muslim Somali immigrant, instead of the militant Amish gun owner the media was praying for.

My good friend Nicki has dissected this in detail over at the Liberty Zone. I highly recommend it.