September 11th is a thing I don’t really comment on very often. Other individuals, like Sarah Hoyt, can give you a summation of the event, of the losses of that dark day, and what we learned from it. And, furthermore, they can do a better job of it than I can. Nonetheless, I will tell my little story, and how it relates to my own writings here. For 9/11 was a strange time, it was quasi-dreamlike to me. There was an element of denial in it that persists to this day, despite the pictures and meme graphics plastered all over my Facebook wall this morning.

Yes. I, too, remember the moment the first tower fell, and then the second. I was merely 21 at the time, living in California near China Lake Naval Weapons Center, rolling out of bed to go work the minimum wage job I managed back in those days. My apartment was a hellhole, a dingy studio with stained carpet that looked like it came out of the 70s. Perhaps it actually did, for certainly the landlords were not prone to maintaining the place to any great degree. But it was mine, something to be proud of when you’re working for peanuts. I had no TV, and precious little of anything else. Cell phones existed in those days, of course, but a barely-solvent minimum wager had no cash for such extravagance.

To say I am not a morning person is to suggest that Donald Trump is not a Rosie O’Donnell fan, and I had just finished a late shift the night before, so it was especially bad. Going through the rituals that day was a monumental task. My zombie-self managed to dress, somehow, and get out to the rusting Blazer parked out front. A few whacks of the hammer, and the motor turned over, coughing to life and belching a cloud of smoke that probably meant a failed emissions test was in my future. And, naturally, the radio didn’t even work, so I was still ignorant of what was happening. Looking back, I remember how empty everything was. The roads were clear, the usual folks walking up and down China Lake Blvd. were nowhere to be seen.

Then I saw my first tank. Yes, a tank was driving down the median turn lane of China Lake Blvd. You must understand that, living as close as I did to a military base, I had some idea of what was normal and what wasn’t. There were armored vehicles of some sort in the base, but they categorically never left it. Certainly you didn’t see them cruising down the roads of the civilian part of town. The entire thing was like some kind of Twilight Zone episode. I had to pinch myself to be sure I wasn’t dreaming. A bustling town was empty, military vehicles were the only thing in sight, soldiers the only people around, each staring at me as if evaluating if I were a potential threat.

That was my first clue something was terribly wrong. Jets broke the sound barrier overhead, which happened on occasion (this was a weapons testing facility for the Navy), but coinciding with the appearance of tanks on the roadway, it was clear something had gone down. By the time I reached the parking lot of my workplace, I noticed that it was entirely empty. I was part of the opening shift that morning, but there were always managers who got there before me.

I wound up stopping off at my mother’s house, which was just down the road, to see what the hell was going on. I arrived just in time to see the first tower fall. 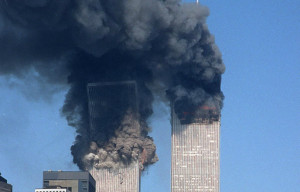 Obviously not what my zombie-brain was expecting to see.

As exhausted and zombie-like as I was, the whole thing remains surreal to me in my memory. Tanks driving down an otherwise empty road, formations of fighters over head scrambling off to who-knows-where for who-knows-why. Empty parking lots and an entire town basically shut down, because everyone was glued to their televisions and radios. Towers falling, the Pentagon burning, and the screams of shock and pain on the television, and from those watching it.

It didn’t really hit me for awhile. I went through the motions at work (for we finally did open, but almost nobody came to buy anything). The magnitude of what I had seen didn’t reach me until the next day. That’s when I understood the essential truth my zombie-self had missed: a World War had flamed up. Life was never going to be the same.

Oh, don’t be so melodramatic, you might say. What really changed? My job was there, same as before, and the tanks soon went back to wherever it is they normally lurk. The fighter jet formations went back to their usual routines: bombing the distant desert with whatever new toys the Navy had thought up for them. New York lost some buildings, and few thousand people died, but that was it, right?

I’ll tell you what changed. The entire perception of Islam. Not a week after the towers fell, my coworkers were discussing the prejudice Muslims faced because of the attacks, and how it would be wrong to blame them for the actions of their religious compatriots. Before, I don’t think a single one of them thought of Islam more than as some distant corner of the Earth, where pigs were safe from the marauders of the bacon industry and women were covered in strange dress. Here there be dragons, and what have you.

After 9/11, it was on everyone’s minds. And, in a sense, it has never ceased to be on everyone’s minds since then. The terror worked, for it made Islam seem powerful. Daily conversations were exchanged about Islam, terror, and reprisal. Wars were launched, first against Afghanistan and then Iraq. People marched out to do battle with them in their homelands. Reprisal attacks and attempted attacks were commonplace. Sure, Islam had always had a terrorist streak to it in the modern era, this wasn’t their first rodeo, but now the paradigm had shifted. They weren’t a nuisance, to be ignored when the news cycle ended. They were a hot item.

Soon after the events of 9/11 retreated from the 24/7 news cycle, the victimhood narrative began. Muslims were victims, you see, of various forms of oppression and prejudice from Americans (especially White Americans). And don’t forget those pesky Crusades. Suddenly, we needed to apologize by building mosques near the site of the attack, by accepting refugees, by not bombing enemy positions in Iraq and Afghanistan if they were, for instance, near some sacred site. Note, that in the Middle East, you could throw a rock and hit half a dozen sacred sites. America was simultaneously grovelling and trying to fight a two-front war with one hand tied behind its back. That, too, was surreal.

It was as if we couldn’t decide whether to surrender or fight, so we went ahead and did both.

Since 9/11, Islam has been the 800lb Gorilla in the room, the people nobody wants to offend, the people celebrated as innocent victims, the faces of religious political correctness. All they had to do to achieve this victory was crash a few planes into buildings. It is as if the Japanese had launched the Pearl Harbor attack, and our response was to worry about the prejudice Americans held of Japanese people. Then, of course, we would offer to build a Shinto shrine on the site of the attack and bring in as many Japanese immigrants was we could manage, regardless of whether or not they wished to become American.

In the Middle East, tanks driving down the boulevard are an everyday occurrence. Jets fly overhead, and bombs fall from the skies. I guess that’s why my memory of 9/11 is so surreal. Given that China Lake is out in the Mojave Desert, for a moment it almost felt like I was living in the Middle East myself. Commerce stopped, the troops were out, looking for a fight. The jets were overhead, the sonic booms deafening. 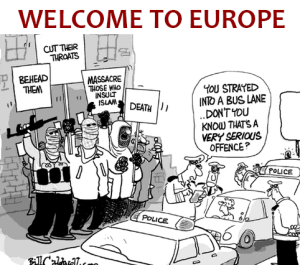 Is it fear that motivates this thinking? Cowardice? Or is it something more sinister?

As we bring in more and more Muslims to the West, out of some sense of misplaced guilt or weaponized empathy, we get closer to that strange dream. We cede more of our civilization to them. We do not demand that newcomers become like us, but rather that we move aside to accommodate them. They are our superiors, and we must defer to them. We must surrender our treasure, our culture and our way of life for them. Do not draw the Prophet, for that is inflammatory. Oh, and give us more of your tax money to pay for them to come over, 10,000 are on their way now. The dead of 9/11 must be looking on us now as the greatest of fools, our place in the annals of political stupidity assured.

9/11 turned out to be a false alarm for the tank drivers roaming the streets of Ridgecrest, California. The next time, we may not be so fortunate.