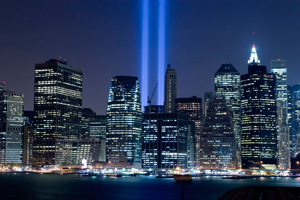 9-11 was a terrible moment in American history, everybody knows that. In many ways, America still reels from that attack. Fighting continues in the Middle East today. Distrust of Islam persists, and perhaps rightly so. It’s hard to take it on the chin from men screaming Allah Ackbar, and not see parallels in the Imam down the street. It’s a complicated situation. Certainly, I don’t wish the peaceful, decent Muslim any harm, but it’s hard to tell him apart from those that have lost their minds to fundamentalist insanity. The latter often masquerades as the former.

What I can say with certainty, however, is that the government and the people overreacted in many ways. I don’t think those that died on 9-11 really wanted TSA agents patting down old ladies to be their legacy. Spying on Americans to save Americans from Middle Eastern terrorists is a special form of lunacy. Consider that they claim to protect freedom by depriving you of it. The NSA and its spying is not the right reaction to a problem that is rather like a Black Swan: unpredictable and almost random.

Make no mistake, that’s what this was. Terrorism is, by its very nature, unpredictable and random. We can look in hindsight and see a pattern, but nobody can know for certain where all terrorists are, or what they may do. We will catch some of them with some common sense measures, but common sense is precisely what people seem to avoid. Major Hasan should have been investigated early, when his inflammatory statements about Jihad were first uttered. But we don’t do these things, because of perceived racism, or because of supposed religious discrimination. Instead we spy on everybody equally, and pat down old ladies while letting the Middle Easterner pass through unmolested. There is no sense in it.

For a short while, 9-11 proved that America could still unify itself, that Americans still cared about their fellows and were a force to be reckoned with. But we’ve lost that message in the time since. The first-responders from that day suffer their injuries in silence, the TSA agents continue their lunatic, Gestapo-like behavior, and the Middle East is, perhaps, worse than it was when all this insanity started.

Someday we will pay the price. And it will be another 9-11, or worse.

Please, America… wake up. You said to ‘never forget’ but that seems to be exactly what you are doing. You remember the event, but you’ve forgotten the lesson.