So I have returned from my short little vacation, a free trip to Las Vegas, gambling mecca extraordinaire. Of course, I’m not inclined to gamble, because the house always wins in the end. But we had a great time going to some shows, meeting some old friends, and enjoying the break from work.

Nonetheless, the gambling environment is instructive in human nature. People know that they will lose money, they know the odds are stacked against them, and they play anyway. Even if the house advantage is razor slim, as in Black Jack, repeated often enough the house still wins.

Democracy in America operates under a similar principle. The primary purpose of a biased media is not to prevent a right-wing victory per se, but rather to give the house (the Democrats) better odds. The same is true of our Leftist education establishment, celebrity figures spouting mealy-mouthed Marxist platitudes, and so on. Even now, with desperate plays by Jill Stein to force recounts in the Rust Belt, and with SJWs harassing Republican electors and fantasizing about the electoral college putting up John Kasich as an alternative… we are seeing nothing more than last minute, desperate plays by the house to recover from a loss they didn’t expect.

Yes, the house always wins the war in the end. But they still lose individual battles, individual hands, and this one cost them big time. You might even look at Donald Trump as a card counter. He knew the game the house plays, because he was part of the house.

So full media, education, and cultural control is sufficient to give the house an advantage, but not enough of one. Certainly not enough to bankrupt us as quickly as they would prefer. So another means was identified and created in recent years: Virtue Signalling. 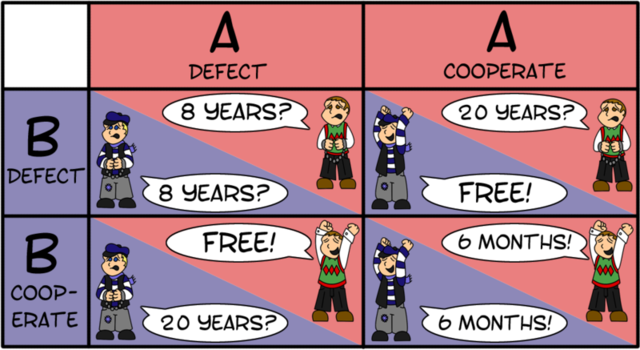 The numbers used often vary, but here is the basic matrix.

Virtue Signalling is the cheat code to Game Theory. It is how politicians, SJWs, and other assorted tyrants on planet Earth have managed to short-circuit the rational self-interest of people in Western countries. It uses political correctness as a bludgeon with which to force you into a default state of “cooperate”. Knowing that you will usually choose “cooperate” due to political pressure, they are then free to “defect” whenever they wish, leaving them with all the benefits, and you with all the costs.

It would be like playing poker where you had to show your hand (because Social Justice, or whatever excuse is in fashion at the moment), and the other player could keep his hand secret.

It must have been a consistent problem for tyrants throughout history. How do you get a theoretically democratic populace to vote consistently against their own rational self-interest, and in favor of your own? Control of education was one natural step, of course. If you fill the heads of impressionable young people with Communist “end of history” claptrap, they can be counted upon to vote your way for a while out of ignorance, at least. But reality quickly intrudes…

The quote falsely attributed to Churchill (it may have actually originated with Edmund Burke) explains for us:

So propagandizing education only works for a while. Virtue Signalling political correctness is a much more consistent weapon, because it can also be used against people who know better, but are merely afraid to speak up due to the probable consequences to career, family life, and friendship.

You better show your poker hand, pleb, or else you’re an evil-mean-bad person, and you’ll lose your job. Virtue Signalling is your warning that you are treading too close to “defect” and you better “cooperate”. No such restriction applies to the other side of the bargain.

Why? Because anything other than Keep Faith is hate, bigotry, racism, sexism, homophobia, transphobia, otherkinphobia, and whatever bigot buzzword bonanza the SJW Left decides is the cause-of-the-minute.

At this point, I cannot conceive of anything that any Leftist victim group could possibly do that would diminish them in any way in the eyes of the Left. If Islamists nuked an American city, they would still say that Islam is a religion of peace. If a repeat of the LA riots occurred, and another Reginald Denny was pulled out of his truck and beaten near to death, the sympathies of the Left would still be with the poor, disenfranchised thugs, not the truck driver, who would still be accounted as having white privilege. And if a woman raped a man (yes, it is possible), radical feminists would celebrate the crime as a great step forward for women’s rights.

They may as well say: “always lose.”

Life is not a zero-sum game, or at least it shouldn’t be, but the Left plays it that way. Their entire ideology is built around it. Marxism is an economic zero-sum ideology. Social Justice is a social zero-sum ideology. And, as the house, they seek to maximize their personal gain from it. They are the house, The Man, the Establishment, whatever you want to call it. And we are the poor slobs dumping money into the slots by the bucket load. And on top of all that, they still cheat.

Only, unlike my trip to Vegas, there is no option to say “no thanks, I don’t feel like playing a rigged game.”