Social media is full of long-winded, acrimonious debates about politics, sociology, cats, etc… It’s enough to make a man seriously consider giving it up completely. My colleague at Liberty’s Torch discussed cutting that particular line earlier, and though I have not done what he did, I’d be lying if I told you I didn’t think about it.  Mostly, the arguments are just for show. People don’t expect to win hearts and minds in them, not really. Rather, it’s often just a virtue signal, or the refilling of narcissistic supply.

A few posts in, and the insults about stupidity, bigotry, Dunning-Kruger, and otherwise will make themselves known. And in them we see the true purpose of many such debates: feeling superior. If you infer that your opponent is a Nazi, you feel morally superior to him. If you call him stupid, you can feel intellectually superior. The bigger the audience, the better, so more people can affirm your superiority over your enemy. The actual issue at hand is rarely as important as these feelings. Find me a Facebook debate, and I can almost guarantee you at least one participant who is engaging in this behavior.

What I’ve come to realize is that this behavior on social media is a microcosm for our society at large. The same behavior applies at the highest levels of media and politics. Most of these people have no idea what they are talking about, even most of the so-called experts (contrary to Tom Nichols’ assessment of political expertise). Find me an expert pilot, and we can go through his records, how many hours he’s logged, on what aircraft, and with what results. It is demonstrable. There is no similar metric for media talking heads, especially where results are concerned. And for politics, and measure of this is bound to be skewed by the political views of its members, such that our reliance upon it is already suspect.

This leads to an environment of low accountability. Oh, sure, if a man like Dan Rather gets snookered by some fake memos very publicly, the house of cards can fall down on him. But the mistake has to be high profile enough and, paradoxically, covered by the media enough, for it to get out in the first place.

Media carries with it a credibility that is totally undeserved. You have all experienced this, in what I call the Murray Gell-Mann Amnesia effect. (I call it by this name because I once discussed it with Murray Gell-Mann, and by dropping a famous name I imply greater importance to myself, and to the effect, than it would otherwise have.)

Briefly stated, the Gell-Mann Amnesia effect works as follows. You open the newspaper to an article on some subject you know well. In Murray’s case, physics. In mine, show business. You read the article and see the journalist has absolutely no understanding of either the facts or the issues. Often, the article is so wrong it actually presents the story backward-reversing cause and effect. I call these the “wet streets cause rain” stories. Paper’s full of them.

In any case, you read with exasperation or amusement the multiple errors in a story-and then turn the page to national or international affairs, and read with renewed interest as if the rest of the newspaper was somehow more accurate about far-off Palestine than it was about the story you just read. You turn the page, and forget what you know.

That is the Gell-Mann Amnesia effect. I’d point out it does not operate in other arenas of life. In ordinary life, if somebody consistently exaggerates or lies to you, you soon discount everything they say. In court, there is the legal doctrine of falsus in uno, falsus in omnibus, which means untruthful in one part, untruthful in all.

But when it comes to the media, we believe against evidence that it is probably worth our time to read other parts of the paper. When, in fact, it almost certainly isn’t. The only possible explanation for our behavior is amnesia.

A combination of superficial understanding and political narratives results in articles and news programs that make no sense. The percentage of the problem attributable to either feature varies widely from case-to-case. Sometimes it is blatantly political, and it cannot be explained by ignorance. Other times, it is probably best explained with stupidity. Most cases are probably a little of both. The media and its supporters, meanwhile, are quite blind to this. I came across this gem this afternoon, and it made me laugh out loud for the sheer stupidity of it: 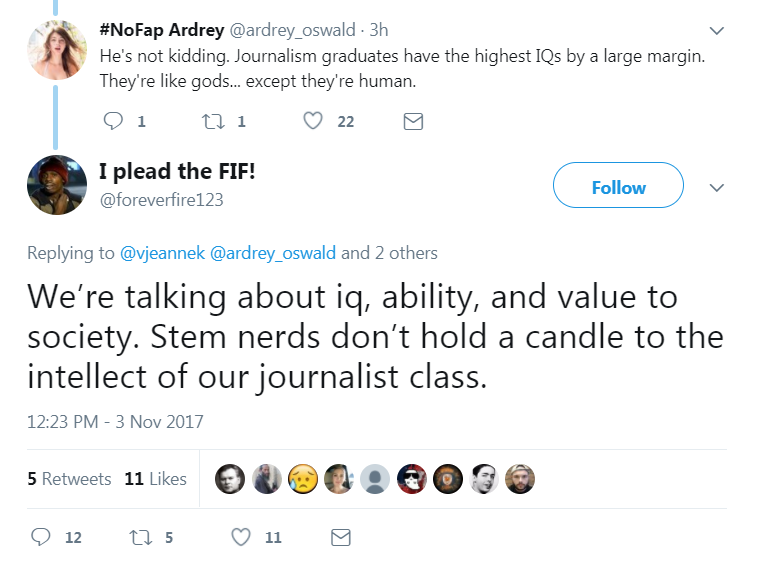 The amusing thing is how easy this is to disprove. A quick glance at the SAT scores of incoming college students, broken down by major, is sufficient to reveal the error (see page 13 here). Of the STEM majors, all outscored journalists (see: engineering, physical sciences, mathematics, computer/information sciences). Some did so by staggering margins (see: mathematics). That the author of that tweet couldn’t be bothered to check his work, when claiming high intellect, is actually pretty damned hilarious. It’s enough to make me wonder if the guy is secretly trolling.

Anyway, point is, try Michael Crichton’s test for yourself. It’s something I’ve spoken of before – I just lacked the convenient name for it. Talk to other people who have done the same for different subjects, people you trust. You’ll soon see just how wrong the media is. Trump frequently calls CNN fake news, but in reality pretty much every outlet I’ve seen is full of shit to greater or lesser degree. Sometime I’d like to see a counter for how many times individual journalists have been caught in lies, or made serious mistakes driven by stupidity and ignorance.

These are the same people who, like the randoms on Facebook, want to demonstrate how enlightened they are, how wise, all-knowing, and progressive. They have a bigger podium, of course, and more spectators. But the motivations are similar enough. It’s all about appearances and narcissistic supply. It all boils down to a statement even a toddler could understand, and likely hears frequently on the playground. “I’m better than you! Neener-neener!” But they aren’t willing to do the work. They all expected Hillary Clinton to win, right up until she didn’t. Never forget how badly they called that election. If you get amnesia about their smaller mistakes, at least hold on to that one. They pretend to expert status. Meanwhile Trump, the supposedly stupid bigot, baits them like a matador. It’s comical how he plays them.

They want so desperately to shout down this man. I once thought it was because of his immigration policies – and I have no doubt that was a major factor, at least at first. But I’ve come to realize that there’s a deeper reason. He makes them look like idiots. He hurts their egos. Because, deep down, they know they aren’t the superior intellects they pretend to be. They know they are fake news. And he not only sees through them, he’s exposed them as frauds in front of the world. This they cannot forgive, or forget.