A New Mantra: Ban Nothing

Here’s a bit of heresy: ban nothing. Did that raise the hair on your back? Did it strike a chord? Did you find yourself thinking “but Thales, that can’t possibly work!”

One of the more bizarre news items of the day relates to a continuing fetish of American municipal governments for banning plastic straws. Now, a liberal acquaintance of mine assured me that he was not inconvenienced by the use of biodegradable paper and wax straws, and plastic straws do have various environmental consequences. In this, my liberal acquaintance is entirely correct. Yet I still disagree vociferously with these straw bans.

To illustrate why, let us go back to the days of Prohibition. Take a gander at these propaganda posters from the period: 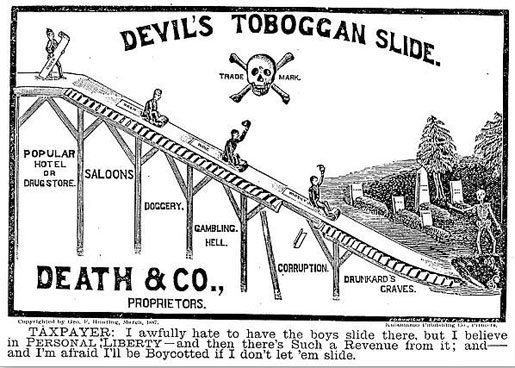 Alcohol had then, and still possesses, a number of terrible consequences for overuse. We have drunk drivers, alcoholics, violent drunks, and to say nothing of the things I see DJing the clubs. Yet Prohibition failed and was repealed. Why?

The usual argument is that banning doesn’t work because people will get what they want regardless. There will be speakeasies and bootleggers, organized crime and street thugs. That’s partially correct. But let’s be frank. None of those things will be a problem for banning plastic straws. Certainly, I don’t see organized crime selling crates of plastic straws out of the backs of sketchy minivans. So what’s the real issue?

The trick of the Left is to focus on those negative things in an arbitrary fashion. For the things they like, they speak only of the positives. Weed will save lives, reduce pain, relax people. For things they dislike, they speak only of the negatives. Straws will hurt turtles, and won’t degrade for decades. Animals might ingest them. Ban straws. Legalize weed. Ban guns. Legalize gay marriage. There is no principle here, no overriding guidance they are following, only arbitrary emotions. These are the whims of a mob. If 50% + 1 don’t like something that you like, ban it!

What a lot of people don’t realize is that the mob is not necessarily consistent. 50% + 1 may be found to ban anything and everything, because a person may like ban A, but be against ban B.

Most Leftists are essentially reacting emotionally, not rationally. However, some attempt to rationalize it by amount of harm. They attempt to weigh all of the consequences and all of the benefits, and say that if the balance is more toward harm than good, we should ban it. This presumes that all the consequences and benefits are known (or a sufficient number of them to make a reliable decision). This tries to masquerade as principle.

A common example is when they argue that guns don’t have sufficient benefit to outweigh the harm, but automobiles do. So even though automobiles kill more than guns, we should ban the guns, but keep the automobiles (some other Leftists want to ban both, there’s ban A and ban B for you, again). However, what is accepted as a benefit is not consistent between proponents and opponents of the bans. For instance, a Rightist is likely to include incidents where a thug was discouraged from attack merely by the brandishing of a firearm (such events are common), whereas the Leftist generally only wants to include incidents of a bad guy with a gun, stopped by a good guy with a gun, where the good guy is not employed by the government (far less common).

Furthermore, the Leftist generally tries to include suicides, even though many other alternate (and just as easy) suicide methods exist. Japan has a higher suicide rate than the US, despite a robust gun ban. The Left artificially reduces the perceived benefit, and magnifies the perceived harm by some subtle manipulation with regards to which statistics are accepted, and which are dismissed.

This leads us right back to the lack of principle. What the Left doesn’t like must be banned. They are quite casual with bans, too. They’ll ban guns and plastic straws, both. I heard a tale once of a town in Texas which banned inflatable gorillas. While I’m sure there is an amusing story behind the ban, it illustrates that nothing is beyond the reach of the ban hammer.

This morning, a local community page was full of demands to ban fireworks on behalf of pets, veterans with PTSD, and idiots who hurt themselves doing dumb things with fireworks. The chief proponent of the ban rattled off statistics not unlike what you see in the Prohibition propaganda. 12,000 people annually are hurt by fireworks, she said, and we can’t even count the harm to pets and veterans. They should be replaced with laser light shows, she demanded.

Once you get into debating the pros and cons of a ban, you have already implicitly conceded that bans are justified given a certain harm/benefit ratio. At that point, you are now vulnerable to the manipulation and spin of said data, which is commonplace. It’s an endless rabbit hole, and debates like that spiral into infinity. We’re all caught over the event horizon of a singularity of stupid.

So I’ll repeat the heresy: ban nothing.

An opponent of this statement may attempt to bring extreme circumstances to bear. “Oh, you mean you wouldn’t ban crime? Murder? Theft? Rape?” Each of those things is a violation on the individual’s rights to life, liberty, and property. Those are the consistent principles. So what about extreme drugs like cocaine, heroin, etc… Well, never mind the notion that banning these things has objectively failed anyway, regardless of how much I might loathe them. In my heart, would I like to ban them? Sure. Do I think it’s practical to do so? No. Every attempt has failed utterly. And that circles right back to the original point. Just because I loathe something doesn’t mean it should banned. This is a truth the Left has utterly failed to grasp. To them, dislike is coextensive with “get rid of it, get it out of my sight.” It’s the mantra of tyrants.

In any event, the principle of banning nothing need not necessarily be adhered to 100%. It’s probably impractical, just as my support for limited government does not necessarily imply that I think no government whatsoever can work practically (however much I’d like that). We might say we want to get as close to that principle as is possible and practical. Certainly we do not violate the principle for something as trivial as drinking straws. If you’re going to disobey the rule, you better have a damned clear, concise, and dare I say obvious reason for doing it. And even then, be exceedingly cautious.

Ah, but am I being arbitrary, even with that small concession? Maybe. I’d at least admit that I am, instead of trying to spin the argument otherwise. However, even those things I find incredibly distasteful, I would still not ban. The principle overrules my desires in all but the most extreme of cases – and possibly not even then, if the concerns of practicality can be addressed.

Don’t get caught in circular arguments about the harm and benefits of each thing the Left desires to ban. Instead, respond to the ban demand with some heresy. Tell them you want to ban nothing, and watch their heads explode with anger. For you have just dismissed the core of their entire worldview: that their subjective like or dislike of a thing should be taken seriously and given real weight.